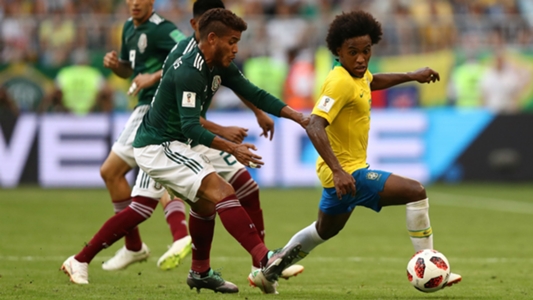 Willian insists he is not letting speculation over a potential move to Barcelona distract him from Brazil’s World Cup campaign.

The 29-year-old will be hoping to make a fifth consecutive start at Russia 2018 on Friday when the Selecao take on Belgium in a mouth-watering quarter-final in Kazan.

The Chelsea man has been linked with a move away from Stamford Bridge in recent weeks, with Manchester United and Barcelona mooted as destinations.

When asked about joining his fellow Brazilians Philippe Coutinho and Paulinho at Camp Nou, Willian said: “Well, they are excellent players with a lot of quality. In addition to great players, they are very good friends.

“People speculate a lot. We see a lot of things on the internet, but this is not the time to talk about this. I’ve not received any information about that. I’m trying to focus on my performance, playing for Brazil.”

While Neymar has been dominating the headlines throughout the tournament, it is arguably Coutinho who has been Brazil’s star man.

And Willian had praise for the forward, saying: “Coutinho has been playing a wonderful World Cup, and he helps us a lot. I hope that he will continue playing even better.”