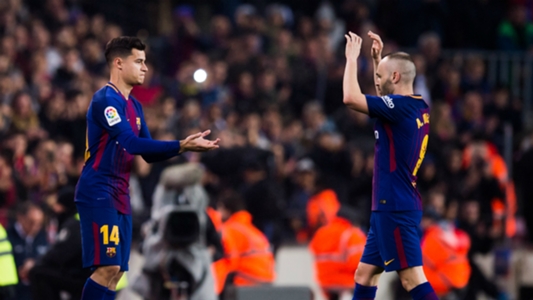 Ernesto Valverde has high hopes for Philippe Coutinho after Barcelona’s record signing made his first appearance for the club in a Copa del Rey victory over Espanyol on Thursday.

Barca trailed 1-0 from the opening leg but goals from Luis Suarez and Lionel Messi in the first half turned the tie around for the holders, who are seeking a fourth straight Copa del Rey title.

With Barcelona’s place in the semi-finals all but secured, Coutinho came off the bench for the last 22 minutes and impressed in his link-up play with Messi particularly.

Coutinho replaced Barca captain Andres Iniesta – the player many assume the Brazilian was bought to replace – and Valverde hinted at how he sees the former Liverpool playmaker fitting in at Camp Nou.

“We have a lot of hope for him,” Valverde said after Barcelona booked a Copa semi-final spot for the eighth year in succession.

“In the sense that he will be good for our game, he can help us with his self-confidence, his ability one-on-one, to see the free player when he is close to the area, the danger is sensed.

“[Coutinho had] a simple game, but I think it went well. Let’s see, this is the beginning.”

Barca’s path to claiming the Copa del Rey title is a lot clearer after both Real Madrid and Atletico Madrid were knocked out at the quarter-final stage, Zinedine Zidane’s men suffering a shock defeat at the hands of Leganes.

Sevilla and Valencia are the other potential opponents awaiting Barca in Friday’s draw but Valverde would not be drawn on talk of a crisis at rivals Madrid, with Zidane accepting his job is on the line.

“Madrid are a great rival,” Valverde said. “We are in the semis, it is because we have worked hard.

“In these games you cannot have a bad day because they take you out of the competition.

“I do not stop to think about the rest of the teams. I worry about mine, to be good and to move forward in our competitions.

TO SEMIFINALS Congratulations for your debut @Phil_Coutinho and I hope to score next time . GREAT TEAM WORK!!!!! pic.twitter.com/g712KHA5MY
— Luis Suarez (@LuisSuarez9) January 25, 2018

“Football is what it is, we all know this dynamic, we know that when we win we are the best and when we lose, we are the worst.

“Zidane has done a lot at Real Madrid and has all our recognition.”