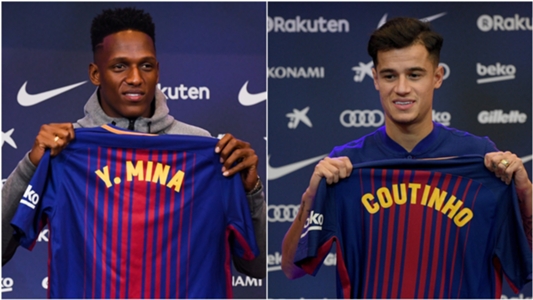 The January signings of Philippe Coutinho and Yerry Mina leave Barcelona as the envy of world football, according to head coach Ernesto Valverde.

Barca followed the club-record €160 million capture of Liverpool playmaker Coutinho by wrapping up an €11.8m deal with Palmeiras for Colombia centre-back Mina on Thursday.

Valverde’s men sit nine points clear at the top of La Liga ahead of Atletico Madrid’s trip to Eibar, and 16 points better off than bitter rivals Real Madrid, who suffered their latest setback on Saturday with a 1-0 loss at home to Villarreal.

It is a far cry from the unrest that surrounded Neymar’s world-record switch to Paris Saint-Germain back in August but Valverde always believed he was inheriting a team of the highest quality when he elected to leave Athletic Bilbao.

Valverde went on to praise Mina’s all-round ability but suggested it is unlikely he will take part at Anoeta.

“He’s a player who’s daring at the offensive area of the field. He’s spectacular in the air and defensively as well,” he said.

“Seeing him train we need to see how he’s going to adapt to the team. That’s something important. He gives us the feeling he can do anything.

“When might he make his debut? I don’t know. We have to see how he feels. He has to train with the team first.

“We have a style of play he has to adapt to. We know it’s not easy for defenders and that’s where we think he’s going to play.”

The Turkey midfielder has failed to scale the heights he reached at Atletico since joining Barca and his loan move runs until the end of his Camp Nou contract in June 2020.

“He’s a player who was here, he’s very talented. He’s shown it in the time that he was not just here at Barca but at Atletico,” Valverde added, having failed to grant the 30-year-old a single senior appearance during his tenure.

“Maybe he didn’t have the opportunities he wanted this year, but I have nothing else to say.”