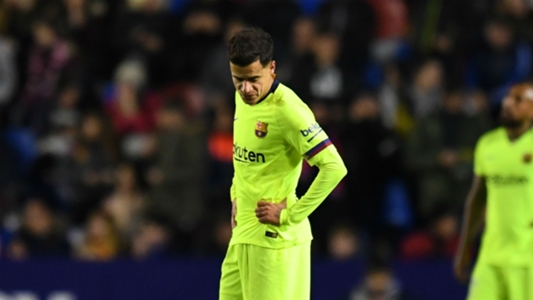 Ernesto Valverde praised Philippe Coutinho’s creativity and character after a tough outing for the Brazil star in Barcelona’s 2-0 win at Girona.

Goals from Nelson Semedo and Lionel Messi restored Barca’s five-point lead at the top of La Liga, although Girona caused a share of problems for their illustrious visitors – even after Bernardo Espinosa’s 51st-minute sending off.

It might have been a more straightforward victory had Coutinho converted a sublime Messi pass midway through the first half and he botched another one-on-one opportunity in stoppage time.

The former Liverpool forward is reportedly unsettled at Barca, a year on from his blockbuster move, and is no longer a natural choice in Valverde’s strongest XI.

Nevertheless, Coutinho’s head coach feels there are better times ahead.

“What I like about him is that he always tries things and takes on his man,” Valverde said.

“He had chances but didn’t score because their goalkeeper is excellent. He’ll convert other chances soon.”

Here we go with the second half…

Coutinho had started the last two La Liga games before Sunday’s win, but previously had not been selected in the starting XI for four games in a row.

The former Liverpool and Inter man has also not scored in the league since October and has registered just one assist in the last 15 La Liga games.

His poor form has even seen him linked with a mega-money move to Manchester United and Paris Saint-Germain this month.

However, Valverde’s comments seem to imply Coutinho will remain at Camp Nou for the foreseeable future.

The Barca coach singled out Coutinho’s compatriot Arthur for praise after the midfielder gave the Spanish champions some much-needed control upon his 58th-minute introduction in place of Arturo Vidal.

“We were having some difficulty because they were pressing high and we couldn’t pass through it on occasions,” he explained.

“These losses of possession led to Girona’s main chances. When Arthur went on, he had the ability to keep the ball.

“Plus, they were down to 10 and it was a matter of controlling the game and of finding the open man. In the end, we had more chances and sealed the result.”