There won’t be too many lads down the boozer bragging about how their accumulator came in on Thursday night?.

In case you hadn’t heard, both Real Madrid and Barcelona were unceremoniously dumped out of Spain’s cup competition, and plenty of heat was thrown around on social media.

Shall we start off with the night’s first kick off, then? 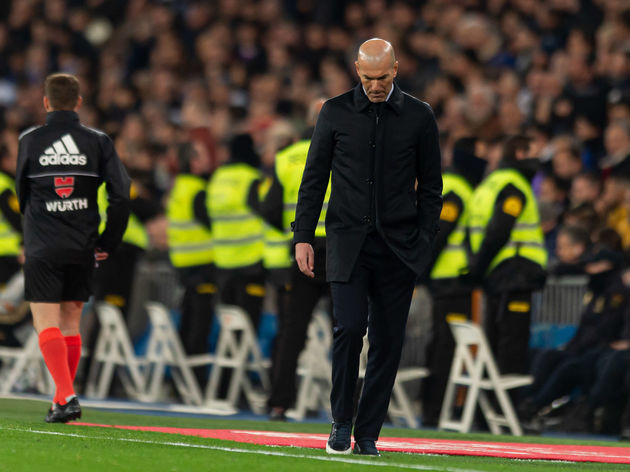 Zinedine Zidane’s trophy record at ?Real is beyond phenomenal, so it’s basically a seismic shock whenever he fails to win a competition his side enters into.

?Los Blancos were comfortable favourites for their clash with Real Sociedad, who included Real loanee Martin Odegaard in their starting lineup for the fixture at the Bernabeu.

The Norwegian evidently wasn’t worried about any potential awkwardness a god-like performance might cause at pre-season over the summer, however, as he turned in a magnificent showing.

Odegaard scored the opener – his first ever goal at the Bernabeu – before former ?Borussia Dortmund youngster Alexander Isak got in on the act, scoring twice in two second-half minutes. Marcelo would strike back but Mikel Merino soon reestablished the three goal advantage for the visitors.

Rodrygo and Nacho would get Real within a goal of Sociedad before Andoni Gorosabel was sent off for two bookable offences, but the visitors held on to secure their spot in the semi finals.

Needless to say, Twitter fan accounts like ViciousValverde, MagicalModric and BonkersBenzema got pretty upset at the result, while most of the praise got sent to Odegaard…

Odegaard off to a huge ovation. What a player he is….and will be

Odegaard just gave the perfect example of a “just scored against a former (current in this case) club” non celebration. Just turns around and walks away.

Always our players who are loaned out scoring against us…Mayoral, Mbappe, Odegaard

But there was obviously some hate for Zidane and the club in general.

Real Madrid the type of club to be able to win the Champions League 3 times in a row but can only win the Copa del Rey 3 times in 30 years.

Well, if any ?Barça fans thought it would be a fun idea to rip into their Real counterparts for exiting the tournament in such a ridiculous way, they were served up some steaming hot karma barely an hour and a half later.

Quique Setien’s side dominated possession but failed to make the most of it – essentially the former Real Betis manager’s Barça career so far in a nutshell – before Athletic Club’s Inaki s flicked a header past Marc-Andre ter Stegen for the game’s late winner.

Things are pretty hectic at Barcelona at the moment, and the last thing those in charge would have wanted was to see a very winnable trophy become un-winnable. And when you lose a quarter final in a knockout tournament, you can no longer win that tournament. That’s just how it works. Hey, I don’t make the rules, OK?

Barcelona didn’t win, but that was probably their best away performance all season.

Athletic barely created a chance, Barcelona controlled the game, had 3-4 golden chances to score, and had a clear penalty waved away. Can’t always win, but a very promising performance.

A penny for Ernesto Valverde’s thoughts. Barcelona swore he was the problem. That sacking him will restore the great club to it’s great factory settings and get it ticking all boxes again.

So what does all that mean?

It means Real Madrid, Barcelona and ?Atletico Madrid will not be involved in the Copa del Rey semis finals. It’s also the first time since 2010 that the Copa del Rey final will feature neither Barça nor Real.

Instead, Mirandes, Granada, Athletic Club and Real Sociedad will fight it out for the trophy, with the draw for the semi finals taking place on Friday 7 February.

Those teams have a combined 25 Copa del Rey titles between them. Mirandes have won none. Granada have won none. Real Sociedad have won two. Athletic Club have won 23. They’re probably just about favourites.