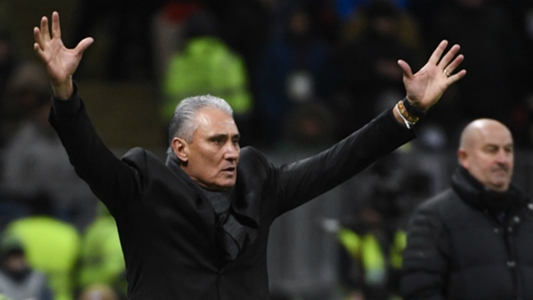 Tite feels facing Germany in an international friendly will be important emotionally for his Brazil side, four years on from World Cup humiliation.

Germany destroyed the hosts 7-1 in the semi-finals of the 2014 World Cup, plunging Brazil into a state of national despair.

Brazil travel to Berlin on Tuesday to take on Germany for the first time since that game, Joachim Low’s men having gone on to beat Argentina in the World Cup final.

And Tite – who was not in charge of Brazil at the last World Cup – accepts his players may be affected by the memory of being thrashed by Germany.

“The 7-1 game is the most recent game,” Tite said. “And of course we know that we’ll play Germany in Berlin, they were world champions, they beat us 7-1 and it’s a step that’s passed.

Tite’s side beat Russia 3-0 in Moscow on Friday as the South American side build towards Russia 2018, with goals from Miranda, Philippe Coutinho and Paulinho earning a comfortable win.

Coutinho took a deeper role in midfield, linking play for Brazil, and Tite picked the Barcelona man out for praise after an influential display.

“He played very well, outside, roaming, inside, he is a polite and competitive player,” Tite said.

“Someone who can be competitive, strong, and be polite at the same time. He is our own example.

Paulinho won the penalty converted by Coutinho and wrapped up the scoring himself with a back-post header, with the Barcelona midfielder pleased with the role he is playing under Tite’s leadership.

“Tite gives me absolute freedom to do what I have always done throughout my career,” Paulinho said.

“We knew about the difficulties we were going to face. In the second half the Russians opened up more, there were more spaces and the chances came.”