The summer transfer season is in full swing and the money is flowing all around European football.

With Griezmann in, and moves for Inter’s Lautaro Martinez and Neymar – yes, Neymar – in the pipeline, Barça’s forward line could be absurd next season. So let’s take a peak at the potential options at their disposal next season.

The challenge for Barça is accommodating Griezmann into their team, and this is one way that Valverde could do it without disrupting things too much.

Attacking overload is one way of looking at it, but can you imagine having these four on the pitch at the same time?

Griezmann operated a more central role at Atletico, often linking up with the main striker. If he does the same at Camp Nou, he could be out of position defensively.

Firstly, he may not be too keen on the defensive side of things anyway – and sitting alongside Messi in the floating role when out of possession would probably not be a great look.

A combination of Arthur, Frenkie de Jong, Ivan Rakitic, Sergio Busquets (oh my god, how many more options!) and Arturo Vidal in a midfield two will, as a result, be run ragged – and we all know about Barça’s defensive frailties against the big boys. With Luis Suarez now 32, the goalscoring burden on his shoulders could be eased by playing Griezmann alongside Messi – allowing Valverde to freshen Suarez up for next season’s Champions League.

The Uruguayan scored just once in last season’s campaign – though he did net 21 times in La Liga. If this tactic is employed, Philippe Coutinho’s Barcelona career could be spared.

Griezmann has been deployed as a central striker many, many times but you wouldn’t necessarily call him an out-and-out striker.

He did score 15 goals in La Liga last season, but playing alongside a player of similarly small stature in Messi may not suit his game. With the Argentine tending to run at opposition defences, playing most of his football in front of the defence, opportunities for Griezmann to break in behind may be few and far between.

We’ve alluded to Suarez’s ageing legs – but there’s no way the Uruguayan will fancy surrendering his spot on a regular basis, meaning the Frenchman’s place in the team could be under threat immediately. 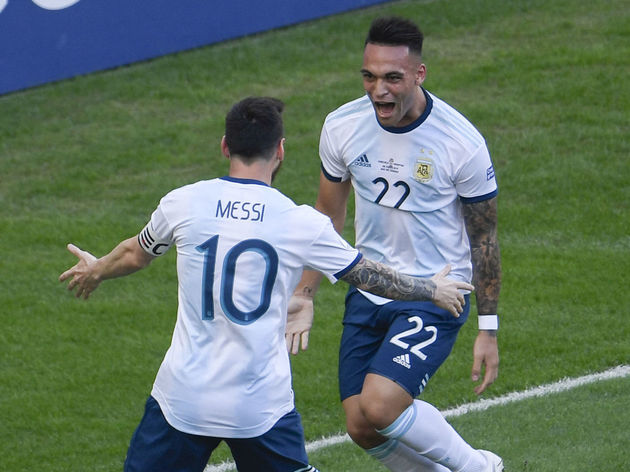 Heading back to 4-2-3-1 – what’s the difference you ask? The presence of Lautaro Martinez we answer.

Martinez netted nine times in Serie A for Inter last season, but often played backup to Mauro Icardi. He does, however, have an understanding with Messi at international level – having scored twice in three Copa America games together this summer.

Martinez would become the focal point, making direct runs and linking with the three behind him. The club may need to sell Coutinho in order to fund bringing him in, but a bright future appears to be head of him.

You can’t win things with kids (just ask Alan Hansen about Manchester United during the mid 1990s), it’s as simple as that.

Okay, so Dembélé and Martinez aren’t kids exactly – but they are lacking in experience to a degree, despite their undeniable talents. Hefty price tags can often make players disappear into their shell, and between the two of them, we could be looking at combined transfer fees of around €250m.

That, is a hell of a lot of money. Though unlikely (if we believe what we read), Coutinho’s Barcelona career could be resurrected – taking up residence on the left hand side of a front three. Messi and Griezmann could fritter between the right hand side, swapping around as they see fit.

The central striker will operate as a false nine, dropping into pockets of space and looking to feed the wingers, who will be cutting in from their flanks between the centre-back and full-back.

A midfield three of Arthur, Busquets and De Jong, for example, would have the middle of the park on lockdown – giving Barça a stable base and good balance to their attack. Freedom of movement, fluidity of passing and relying on ball skills could suit La Blaugrana’s flare players down to the ground.

Creativity wouldn’t necessarily be an issue, but scoring goals might be. Take Messi out of the equation, and Griezmann to a degree, and you begin to think the goalscoring touch may be missing from this side.

Yes, Suarez and Dembélé would be options from the bench – but as mentioned previously, will they really be satisfied with playing bit-part roles? Good job that’s Ernesto’s problem. Can you imagine? Not only would the famed ‘MSN’ be back together – you’d have a dose of G thrown in on the right-hand side, leaving the G.O.A.T roaming around the middle of the park – wreaking absolute havoc.

Signing Neymar this summer, absurd as it sounds, is a very real possibility – with his no-show at PSG’s pre-season training confirming problems do exist between the Brazilian superstar and his employers. A return to Camp Nou’s left flank would suit him down to the ground – adding an extra dimension of pace back into Barça’s attack.

Add trickery, goals, assists, pinpoint crosses and all around magnificence, and you begin to shudder at the prospect of watching the four grace the same pitch. Understanding how one another plays shouldn’t be too difficult – MSN were telepathic and Griezmann has more than enough of experience of facing the boys.

As good as they would be going forward, Barcelona would be absolutely shocking in defence. Though having said that, they may not lose the ball with the players at their disposal.

But just incase they do, Neymar and Griezmann may need to track back and help out on the flanks. Hmmm seems unlikely doesn’t it.

You could call this formation 4-2-3-1, but let’s be real – this would be 4-2-4, all out FIFA attack style and Barça’s midfield duo of De Jong and Busquets (let’s call them first choice shall we) would be run ragged against top teams.

Would be fun to watch though, right?