With so many competitions both domestically and overseas, the days of 16-man squads are long gone. And with it have gone the days of the numbers 1-11 making up a team’s starting XI.

But don’t be fooled by the modern game with players wearing no.99 because they were born in 1999 (*shudders*), still to this day we hear positions referred to as ‘no.10’ or ‘no.8’. With that in mind, we’ve compiled the best ?Barcelona players ever to have worn the shirt numbers 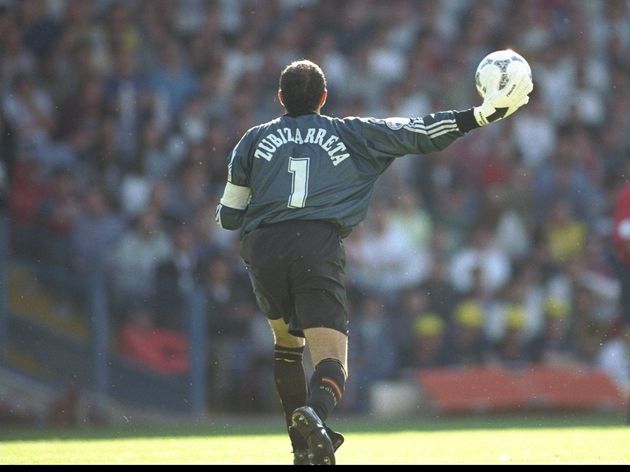 Victor Valdes could make a sizeable case for feeling aggrieved to not be given the nod here, and admittedly he is slightly more decorated when considering team honours.

However, Zubizarreta was probably just about the better goalkeeper, meaning he gets the nod. One of Pep Guardiola’s very first acts having been promoted to head coach of the senior team was to lure ?Alves away from Sevilla.

Spent eight seasons at Camp Nou winning just about every accolade there is to win at the top level of European football. If you’ve ever got a spare few hours, go and look up the individual and team honours Alves has accrued in his 19-year career- it makes Samuel L. Jackson’s filmography look sparse. So, if signing Alves was one of Guardiola’s first acts, signing ?Piqué was his very first act.

Not much higher a compliment than arguably the greatest coach in the world immediately singling you out as his first signing at a club as big as Barcelona.

Piqué created a formidable partnership with Carles Puyol at the heart of the Barça defence. Many questioned whether Piqué would be found out following the retirement of his commanding partner, though he answered those questioned emphatically with the club winning the treble the following year. A giant for club and country. Speak of the devil.

You just know he was one of those annoying kids at school who was good at everything, don’t you?

To say he has gone on to become a better manager than he was a player is some accolade, given he was the lynchpin of one of the most successful sides in Europe.

Guardiola played as a deep-lying playmaker in Johan Cruyff’s team that won the club’s first European Cup in 1992. Not noted for his physical attributes, Guardiola excelled to become one of the greatest midfielders of his generation purely via technical ability and reading of the game. Went on to captain the side from 1997 before his departure in 2001. When you think of Guardiola’s Barça you think of fancy football, flowing attacks, slick through balls and a metronome midfield. But let me tell you, no team gets by on pretty football, and Puyol was the driving force behind that side.

Puyol was a throwback. With his unkempt hair and disregard for how he’s wearing his shirt, his no nonsense approach allowed Pique to become the defender he is today.

It’s often argued that to be a great player you have to be able to cut it internationally and in different leagues, well this man could cut it on any stage in any league in the world. And don’t be fooled into thinking he was just ‘a stopper’. Every player in a Guardiola team had to be able to play football and Puyol certainly could. An all-round brilliant footballer, leader, Barça legend. The heartbeat of arguably the greatest club side ever.

There isn’t a medal this man doesn’t have in his trophy cabinet both at club level and internationally. Had he not played in a generation containing Messi and Ronaldo he would undoubtably have had more individual honours than the multiple third place finishes in the Ballon d’Or voting he no doubt keeps in his toilet.

The midfield trio of him, Andres Iniesta and Sergio Busquets dominated world football for years and are a massive part of the reason Spain and Barcelona were so successful. I would doubt the world will ever see a midfield as stylish and effective as these three. A controversial choice given his decision to leave for arch-rivals ?Real Madrid, but there’s no hiding the fact that Figo lit up Camp Nou.

Made 249 appearances for the club, scoring 45 goals. His five-year spell in Catalonia resulted in two La Liga titles and two Copa del Rey titles, but his time at Barcelona was curtailed thanks to Florentino Perez’s Galactico experiment.

Shortly after leaving for Madrid he was awarded the Ballon d’Or, an award that he won for his performances in a Barcelona shirt but ultimately paraded in a Real Madrid shirt. Now you understand the bitterness. An absolute magician of a footballer.

In terms of achievements, such are the similarities between Iniesta and his partner in crime, Xavi, you can pretty much copy and paste everything.

Iniesta himself has found himself narrowly missing out on the top individual prizes courtesy of Messrs Ronaldo and Messi, though that shouldn’t overshadow what was a stellar career.

Made an astonishing 674 appearances for Barcelona over a 16-year period, scoring 57 goals.

Special mention to the coolness shown as the ball fell to his feet in the 116th minute of the World Cup final. Unflappable. The fact that this man edges Johan Cruyff out of our list tells you already what a superstar he is at Barcelona.

Hungarian Kubala is considered a hero to Barcelona fans, scoring 280 goals in his 345 appearances for the club between 1951-1961. His spell at the club saw Barça dominate domestically, notching four La Liga titles.

His seven goals in a 9-0 romp over Sporting de Gijon remains a La Liga record to this day. He would later return to manage the club. It seems a shame that Ronaldinho and Diego Maradona both miss out but there really could only be one Barcelona number ten.

?Messi’s brilliance is at times forgotten amid the ongoing ‘Messi or Ronaldo’ debate, and it may be that only once he has retired will we be able to look back and truly appreciate how lucky we were to watch this man in his prime.

One set of fans who don’t under appreciate the little magician is the Barça fans. Messi is hailed as a hero to them and can do no wrong, and quite rightly so. Six Ballons d’Or, ten La Liga titles, four Champions Leagues, it’s a shame Argentina haven’t produced a decent defender for about 20 years, or this man would have the lot. Special mention to ?Neymar who was alright at Barcelona, but 130 goals in 235 goals mean Rivaldo takes the number 11 shirt.

The Brazilian World Cup winner wasn’t shy of throwing his weight around at Camp Nou and endured many a fall out with both managers and the club’s hierarchy. But strops aside, his class on the pitch was unquestionable.

Rivaldo rarely settled at a club for long, so the five years he spent at Barcelona are quite staggering. In that time he won two league titles and a whole host of individual accolades.

His hat-trick against Valencia is widely regarded as the greatest hat-trick of all time, topped off with a magical overhead kick from outside the area. Truly one of the greats of his time.