?Goals are why (most) people watch football. They decide games, define careers and designate champions. But a goal can be made or undone by the celebration which follows.

While Eric Cantona’s cool stare or Lomana Lua Lua’s acrobatics often make the highlights, having a message on your undershirt shows a level of preparation and confidence which deserves recognition.

Sometimes they can go badly – Arsenal had apparently made up T-shirts which read ’50 Not Out’ before their 49-game unbeaten streak was rather sourly ended by Manchester United – and who knows how many countless gems have been lost to the simple fact that the player has failed to score.

These displays of thoughtful planning are becoming more and more rare given the punishment awaiting a player who removes their shirt, so let’s take a look back on some of the best attempts to have seen the light of day in recent years.

Thierry Henry usually spent his celebrations trying to perfect the knee-slide, but the Frenchman wasn’t shy of unveiling a hidden message.

Henry’s ‘Bang goes the 0-0 draw’ is steeped in sound logic as prior to this encounter, ?Arsenal hadn’t scored against Liverpool for more than three years. Unfortunately, it was the Gunners’ new signing Lauren who opened the scoring, yet Henry did seal the 2-0 win with his late effort which prompted the reveal.

It may not have been Henry who could first say ‘bang goes the 0-0 draw’ but this message was based on a run of results which began four seasons before he even joined the club, so he earns some extra points for research.

Unlike many of the shirts in this list, Dimitar Berbatov has chosen the homemade option rather than getting someone at the club to use official ?Premier League lettering.

However, the image of Berbatov sitting at the kitchen table the night before Fulham’s Boxing Day game at home to Southampton scribbling the rather self-aggrandising word play of ‘

Admittedly, the Bulgarian scored 15 league goals that season, ten more than any other teammate and a greater tally than Wayne Rooney or ?Sergio Agüero managed that campaign. So, perhaps the pun was justified (if the use of a pun can ever really be justified).

When Francesco Totti equalised on the final day of the season, notching his 17th of the campaign, no one of a Roma persuasion could imagine they would have to wait seven-and-a-half months before the living legend again troubled the scoresheet.

But time seemed to be catching up with the 35-year-old who, when he finally ended the drought, revealed a shirt which read, ‘Scusate il ritardo‘ – ‘

Wrighty celebrated in style, scoring a hat-trick during a 4-1 win over Bolton at Highbury ??? pic.twitter.com/iNJ7kfc0bA

For a player who hadn’t become a professional footballer until the age of 21, to break Arsenal’s goalscoring record set by Cliff Bastin 51 years previously

Fortunately, Wright only had to wait five minutes before tapping in to actually break the record and again revealed the shirt which, if it was anyone other than Ian Wright, might have come across as a shameless bit of corporate advertising.

Instead, everyone at Highbury went into a frenzy and Wright completed his hat-trick in the final ten minutes to claim the match ball, which still serves as a reminder to that triumphant day. 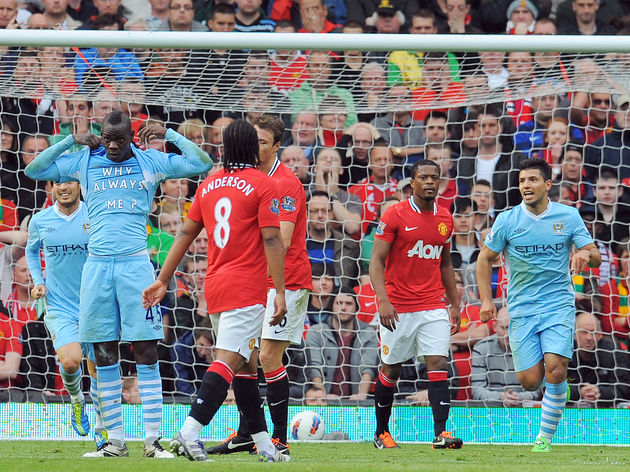 In the early hours of Saturday morning, Balotelli was forced to escape a ‘substantial fire’ in his home after he tried to set off fireworks through his bathroom window.

The next day he turned up for training as normal and was then superb in the Manchester Derby, scoring twice in ?City’s 6-1 win and, of course, unveiling the simple, but iconic, message: ‘Why Always Me?’

In a brilliant PR move, Balotelli was made the ambassador for firework safety ahead of Bonfire Night two weeks later.

Totti could have had several other entries on this list with a section solely dedicated to those in the ?Rome derby, but perhaps his greatest came against Roma’s bitter rivals in 1999.

Having netted a late equaliser in a 3-3 draw earlier in the season, Totti came back to haunt Lazio once more, giving his side a 3-1 lead in the dying minutes of the reverse fixture. After scoring the winner in the 2010 World Cup final Andrés Iniesta was applauded at many Spanish stadiums other than Camp Nou, but none more so than Espanyol’s.

Moments after netting the most significant goal in the nation’s history, Iniesta revealed a shirt which read: “Dani Jarque: siempre con nosotros” – ‘Dani Jarque: always with us’, in tribute to the Espanyol footballer who died of a heart attack aged just 26.