The number ten shirt is unquestionably the most revered jersey in world football. Steeped in history and mystique, those two emphatic digits on the back of a shirt somehow inflate the player deemed worthy to wear it.

At Barcelona, a club to have had some of the best players in the history of the game wear their colours, those who have claimed the number ten shirt are among the greatest.

So, here we take a look at the ten best to have made that famous shirt their own… 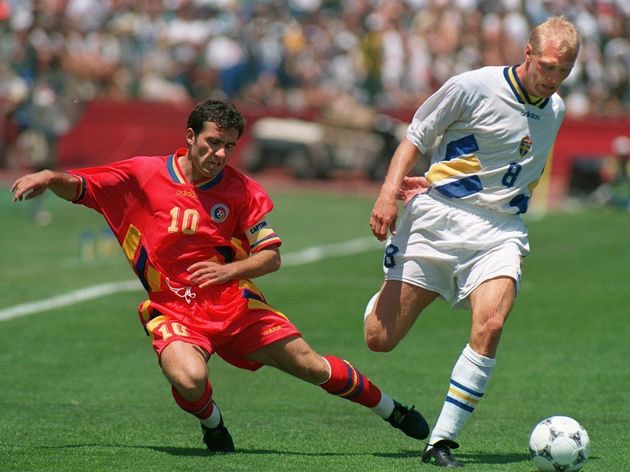 Hagi was an incredibly talented footballer who operated in that classic advanced playmaker role for Barcelona between 1994 and 1996.

He was perhaps overly reliant on his left foot, but when you can regularly knock in 30-yard screamers, dribble past three players and split open defences with it, that one-footedness gets largely forgotten.

The first of several Brazilians in this list, Evaristo played for ?Barcelona between 1957 and 1962. In three of his five seasons with the club he was their top scorer in the league, including two campaigns in which he netted 20 goals.

Yet his most famous strike came in the European Cup when Barcelona met their greatest rivals and the reigning five-time champions Real Madrid in the first round in 1960.

Evaristo’s diving header in the 81st-minute was enough to ensure the Blaugrana became the first side to ever knock Los Blancos out of the competition, cementing his place in Barcelona folklore. 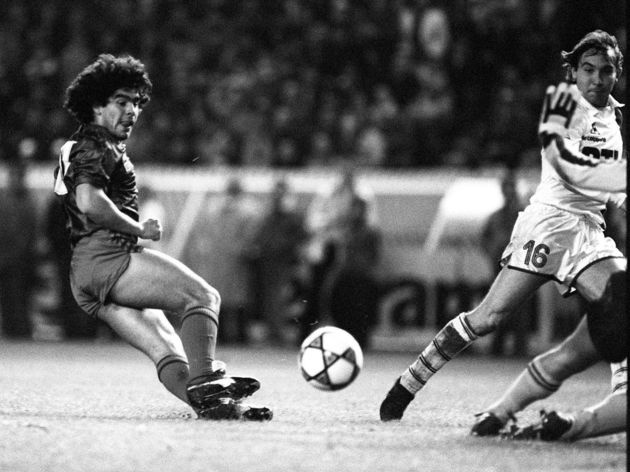 Maradona may be one of the greatest players of all time (he is technically ?number one) but he spent the brightest moments of his career in the number ten shirt (always number ten) of Argentina or Napoli.

He arrived in Spain aged 21 in 1982 for a fee of £5m – the first of his two world-record transfers. In his debut campaign he scored against ?Real Madrid by rounding the keeper, hesitating just enough to send the on-rushing defender Juan José crashing painfully into the post before he rolled it past his writhing opponent.

The goal was so good it earned him a standing ovation from all corners of the Santiago Bernabéu and caused teammate Lobo Carrasco to burst out laughing.

This is a perfect example of what Argentinians call ‘la pausa‘ (literally, the pause): that moment of clarity a number ten should have when he can slow everything down and pick the perfect option. To be described by Johan Cruyff as the most talented player he has ever coached is high praise indeed, but Romário was more than deserving of this recognition.

The Brazilian had unrivalled natural talent with the ability all greats have of making the game look so effortless. His impact at Barcelona was immediate. A hat-trick on his ?La Liga debut against Real Sociedad set Cruyff’s side on their way to the 1994 title and Romário on his way to a 30-goal haul.

Another one of the five hat-tricks he netted that season came in January against Real Madrid. Barça claimed a historic 5-0 win that night but 12 months later ?Romário was gone. His time at Camp Nou had been brief but he had burned so bright that he will always be remembered in that famous number ten shirt. The tall, elegant left-footed Rivaldo was snapped up by Louis van Gaal’s Barcelona in 1997 after scoring 21 goals for Deportivo de La Coruña the season before. Initially, he wore the number 11 as they won back-to-back titles in his first two seasons. He also scooped the Ballon d’Or in 1999.

In 2000 he got his coveted number ten top, but having gained world recognition for his performances on the left wing, it seems by the turn of the century Rivaldo believed his best role to be more central. Van Gaal emphatically disagreed (as the Dutchman had a tendency to do) and their relationship effectively ended.

Nevertheless, in Van Gaal’s absence, Rivaldo scored arguably the greatest hat-trick ever on the final day of the 2000/01 season, with the match-winning goal a sensational overhead kick to see Barça defeat Valencia 3-2 and secure ?Champions League football the following campaign. The temperamental Bulgarian wore the number ten shirt for only one season at Barcelona but would often fill the role that number epitomised.

?Stoichkov was an instrumental part of Cruyff’s dream team which won four consecutive league titles and the club’s first ever European Cup in 1992.

Former Barcelona player Lobo Carrasco described him as the best forward in the world, claiming the striker could “run like Carl Lewis, pass like Ronald Koeman, and finish every bit as well as, if not better than, Gary Lineker”.

He joined Barça in 1955 and would go on to win two La Liga titles and as many Spanish Cups at a time in their history when claiming what was then known as the ‘Copa del Generalísimo’, presented by General Franco, brought an extra layer of satisfaction to their Catalan fans who opposed the regime.

?Suárez would discover his best form under manager Helenio Herrera who arrived at Barcelona in 1958 and oversaw back-to-back league titles. The Spaniard later followed the coach to Inter in 1961 and would cement his legend in European football by starring in the all-conquering side known as ‘Il Grande Inter’.

Some have likened his game to another Barcelona great in Xavi Hernández, both of whom would orchestrate play from deep. But Suárez, with a glint in his eye, is unconvinced. “I hit 40-yard passes, and could switch the player from one side to the other,” he protests, laughing. “My game was much more varied than Xavi’s.” Following in the footsteps of his fellow Barcelona number ten Maradona, Ronaldinho also scored a goal worthy of a standing ovation from Real Madrid fans by slaloming past a young Sergio Ramos at right-back.

From the tricks and flicks to the surfer’s thumb and that iconic and seemingly ever-present smile, ?Ronaldinho brought a different atmosphere and released the tension around the club – a club that hadn’t won a trophy in four years prior to his arrival in 2003.

As Xavi neatly summed it up: “Ronaldinho changed our history”.

Today a statue of Kubala stands outside Camp Nou, the house that László built. As the apocryphal story goes, it was his otherworldly performances which packed their previous ground Les Corts that obliged Barcelona to build the 100,000-seater.

He arrived at Barcelona in 1950 – after the club had snatched him away from the clutches of ?Real Madrid – but due to the ban he received for fleeing his home nation of Hungary, he didn’t make his first appearance until 1951. It was worth the wait.

Kubala simply had everything; speed, power, technique, control and charisma. He was a revelation that changed football and society, becoming the first star of grey, post-war Spain.

In the words of his teammate Giovani Biosca: “Technically, he revolutionised everything – our ideas and those in the whole of Spain.” There isn’t much about Lionel Messi which hasn’t already been said. And even that line has already been trotted out countless times. As Pep Guardiola said: “Don’t write about him, don’t try to describe him: watch him”.

Arguably the greatest player in the history of the game, it just adds to his mythos that he wears Barcelona’s famous number ten shirt.

When asked by La Masia coaches what position he played, ?Messi replied with ‘enganche’, the Argentine word for the number ten.

Barcelona’s all-time top scorer since the age of 25, Messi is still going strong, even if his output has marginally diminished from extraordinary to brilliant. Nevertheless, he is, and possibly will forever be, Barcelona’s greatest number ten.