?You hear a rumour from one source that he’s on his way to Spain, whilst a voice from over there mentions that his next destination is China. How do you keep up with all this transfer gossip?!

The summer is filled with stories. Some of them are true and some are pure fantasy, but it’s never easy to tell the difference. Well, that’s what we are here for! First, it was ?Manchester City who were hot on the trail of Fernandes. However, their interest soon cooled and neighbours ?United appeared to be best placed to land the Portuguese playmaker, who hit a combined 50 goals and assists last term.

Nope, that avenue seems closed, too, though ?Tottenham Hotspur have recently held talks with the 24-year-old. Spurs would no doubt have the funds and motivation to bring Fernandes in should Christian Eriksen depart over the off-season, a prospect which grows ever more likely with each passing day. No, Paul Pogba will not become a galactico anytime soon. ?Real Madrid have done most of their spending already and would be foolish to splash out even more on the volatile midfielder.

?Juventus have become favourites for the Frenchman’s signature and may use winger Douglas Costa to sweeten the deal with the Red Devils. What’s more, Pogba obviously wants out of Old Trafford and would be welcomed back to his old stomping ground in Turin. It would be a shock if this didn’t happen. Every man and his dog has been linked with a move for the colossal ?Napoli centre-back, making it anybody’s guess where he could move to.

One thing that all this speculation suggests is that this story has been blown out of proportion and is primarily media-driven. Would it really be a surprise if no one coughs up the £100m+ for Koulibaly? Manchester City were reportedly in for Koulibaly because they need a new central defender after Vincent Kompany’s departure. For the same reason, they are believed to be tracking Maguire.

Well, it’s apparently less like they’re tracking him and more like they’ve caught their prey; the Citizens have allegedly organised a medical for ‘Slabhead’ and will put the finishing touches on his £65m switch in the coming days.

Cristiano Ronaldo is in at Juve and Dybala is (on his way) out. That’s been the narrative since CR7 landed in northern Italy 12 months ago, with Bianconeri fans swiftly forgetting about their darling Argentine.

Feeling marginalised and unloved, Dybala will likely leave the Allianz Stadium this summer. But, where will he go? As a whole host of clubs are lining up to take him off of Juventus’ hands, it’s not obvious where he may end up.

United are long-term admirers, but seem to be focusing their recruitment on young, hungry players. ?Atletico Madrid, on the other hand, are set to lose their star striker in Antoine Griezmann and would therefore be looking for a new world-class forward to spearhead their attack. This is going to be incredibly blunt: Sane is staying at Manchester City. They don’t need to sell, they don’t want to sell and would only do so for an idiotic price that no one would stump up. 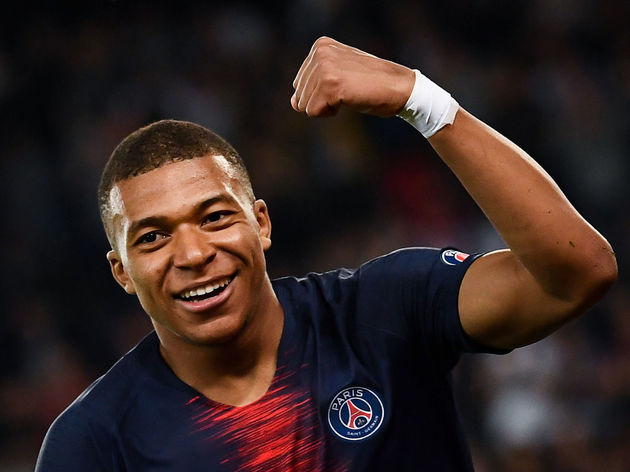 It’s difficult to see the starlet departing the Parc des Princes for at least another season, for most of the same reasons Sane won’t be going anywhere.

Additionally, Paris Saint-Germain teammate Neymar could be on his bike soon, leaving Mbappe as the main man in the French capital, an outcome that will no doubt tempt him to stick around. Here is another transfer that you won’t be seeing unfold for a while. Sancho is tearing it up in the ?Bundesliga, is adored by (arguably) the best set of fans in the world and continues to develop his game with ?Borussia Dortmund.

On top of that, it’s also doubtful whether money could turn this young man’s head; I mean, he left Manchester City of all teams. There is no need for Sancho to go anywhere. This summer’s most talked about transfers? More like this century’s. Still, the Homeric tale of Griezmann’s Atletico exit is nearing its conclusion and I can safely say, no matter what else you hear, the World Cup winner will be turning out for ?Barcelona in 2019/20.

This is a move that has been in the works for longer than we realise and nothing will derail it now. Surely.

Adrien Rabiot on Juventus: “Juventus are a big club who everyone would like to play for. It’s true, we are having some talks.” pic.twitter.com/xq6qFUrDRv

?Arsenal have been sniffing around Rabiot, along with ?Liverpool, United and several elite clubs on the continent. Amongst the latter are Juventus, who seem to have won the race for the out-of-contract midfielder.

The Italians’ sporting director ?recently confirmed their interest in Rabiot and their record of landing free agents suggests they have the upper hand in this one, too. If City keep Sergio Aguero and Gabriel Jesus, they will surely not feel the need to pay the requisite triple-figure sum for Felix.

That would see Atleti as the only serious contender for the Benfica wonderkid left in the running and the lucrative sales of Griezmann and Rodri (to the Citizens) will mean money is no obstacle. Maddison will be in the ?Premier League next term, that I can safely say. Whether he will be with ?Leicester City is a completely different matter.

Apparently all the big boys are in for him – apart from the embargoed ?Chelsea – but, they may all be left empty-handed. Just take a moment to recall how stubborn the Foxes are when it comes to negotiating, assuming they want him, they will keep him at least one more season. Tottenham, ?West Ham United and ?Everton have all taken their turns being linked with Gomes, though one clearly has the advantage. The Toffees’ recent history demonstrates that they have deep pockets and the familiarity they have with Gomes – who spent lat year on loan at Goodison Park – should see them ?wrap up this signing for £22m. So, Aubameyang liked an? Instagram post describing Unai Emery as a ‘puppet’ earlier in the week and has allegedly been offered an ungodly £300,000-a-week wage by an unnamed Chinese Super League team, which apparently means he’s good as gone.

It all sounds like bulls**t to me, two wholly separate events that have been erroneously joined together by the media. Anyway, why would Arsenal sanction the sale of their top performer when they really need to get back into the ?Champions League this time around? If you’ve listened to anything that Bale himself, or his agent, has had to say regarding his future at the Bernabeu, you should really have worked out that this transfer is not happening. The Welsh wizard is quite content raking in £300,000-a-week as a bench warmer and there’s nothing Real can do about it. A couple of weeks back, it looked like Rodriguez would be joining Bale on some Spanish golf course, but he has since been thrown a lifeline by Napoli.

Carlo Ancelotti wants to ?take the Colombian on loan and an announcement is imminent. Get ready to see Rodriguez lining up under the man who brought him to Madrid in the first place. Hmmm… this is like predicting which Paul Pogba is going to turn up each week. Now, I’m gonna stick my neck out and say de Ligt won’t be at Ajax next term. Los Blancos want Eriksen, but Daniel Levy is a notoriously difficult man to negotiate with. The chief-executive will no doubt ask for an astronomical sum, the likes of which Real would be well-advised to ignore having spent north of £300m already this summer.

Would Tottenham really risk losing their talisman for free in 12 months time, or are they that confident of tying him down to a new deal? It’s doubtful, meaning they may have to offer the Dane to PSG, who have been keeping an eye on the playmaker for a considerable length of time. Another simple one here. Rice is far from the finished article and knows that he has an astute coach at West Ham who will handle his young career delicately, aiding his growth. Moreover, the Irons will want to kick on from 2018/19 and push for European qualification, something that realistically requires their midfield general in the squad. As discussed earlier, Manchester United are avoiding splashing out on household names, making Old Trafford an unlikely stop for Coutinho. ?Liverpool have no need to lure him back to Anfield and Chelsea have no means of doing so.

PSG, however, is a good fit for the Brazilian and they will definitely be able to match whatever wage demands he has, as well as guaranteeing Champions League football for as long as their Qatari owners keep pumping in money. Following his immaculate displays versus Manchester City last autumn, Ndombele has become one of the most sought-after youngsters in Europe.

But, it’s not City who stand to land the midfield enforcer, with ?Tottenham benefiting from his desire to move to London. Expect his arrival for Though Ziyech has interested many a Premier League side, as well as German giants ?Bayern Munich, he may well elect to stay in Amsterdam. He has already stated that he would be open to remaining with Ajax and could remain to help If Coutinho is to switch to Paris, it may entail Neymar going in the other direction. Barcelona are reportedly set to offer the former in exchange for his Brazilian counterpart, who wants out of PSG.

Do we see this one coming to fruition? Well, (did I mention this?) Real Madrid can’t really afford him after their exploits and it certainly seems more likely than Neymar’s stunning £200m switch to the Ligue 1 side two years ago, so why not? Online news outlet ?football.london write that Turkish side Galatasaray, which wouldn’t be as outlandish a choice as it may initially appear. He’s out of the spotlight (which many footballers detest), he will surely add medals to his collection and the Istanbul team tend to offer fine pay-packets to their star names. Ramos playing in China is a lovely idea and all, but let’s face it: Madrid aren’t gonna let it happen. It would be silly if a suitor offered what United want for De Gea, as the Spaniard will be available on a Bosman this time next year. On top of that, the ‘keeper is believed to be keen on seeing out his current contract because, well… um… he gets paid a f**kload of moolah! PSG. He’s going to PSG on a free. Remember kids, you heard it here last. Ok, a few papers are suggesting that Lo Celso to Tottenham is a sure thing. That means bugger all in modern football, especially with the Red Devils lurking.

The midfield maestro is hardly an unknown, but he is youthful and lacks the prima donna attitude that Ole Gunnar Solskjaer is attempting to rid the club of. So, Lo Celso to United?

I wouldn’t bet on it, nor would I bet on him linking up with Spurs. His career would be better off if he stayed with a developing Betis outfit, where he is the star of the show. Dybala may be one potential makeweight for Juventus to bring in Pogba, but the more likely scenario is that they use as bait and sell his South American comrade to Atletico.

That ensures they don’t lose out on profit for Dybala (as they may when trying to meet the Red Devils’ valuation of Pogba), whilst also securing the Frenchman’s signature. It’s a win-win-win.