?Barcelona travel to the Czech Republic to face Slavia Prague on Wednesday in Group F of the Champions League.

The Spanish giants will be looking to make it two wins from three in a what has been widely recognised as this year’s ‘group of death’. Slavia picked up a very respectable point at the San Siro against ?Inter on MD1, before losing 2-0 at home to Dortmund. However, the Czech’s will be confident that they could cause Barcelona trouble, in what will be an intriguing fixture.

With an interesting fixture, comes some interesting stats, so thanks to Opta, you can see how these two teams compare. Despite never facing Slavia Prague in European competition, Barcelona have won all four games against Czech opponents, with the Catalans beating Sparta Prague twice in 1999-2000, and Viktoria Plzen twice in 2011/12

Ernesto Valverde’s will hope to make it five from five, and a defeat could mean a serious reality Czech (sorry) for the Spanish giants.

These two teams will face off for the first time in recent history, and Slavia Prague will be the 57th team that Barcelona will face in the Champions League. Out of the 56 opponents they’ve faced so far, Barca have recorded at leat one win over 54 of them. IFK Goteborg (W0 D1 L1) and ?Borussia Dortmund (W0 D1 L0) remain unbeaten against Barcelona, but none come quite as close to the might of Dundee United, who have won four out of four in European competition against the Spanish giants. Who said Scottish football was rubbish? Luis Suarez scored twice against Inter on MD2 in a 2-1 victory at the Camp Nou, but the Uruguayan hasn’t scored in his last 19 away Champions League matches, attempting 59 shots without success since a goal against Roma in September 2015.

The good news for Suarez is that Slavia have only won four of their previous 19 home UEFA European matches (W4 D6 L9), meaning that the Eden Stadium isn’t exactly a fortress.

Could the former Liverpool man finally break his away duck?

It Could Get Messi 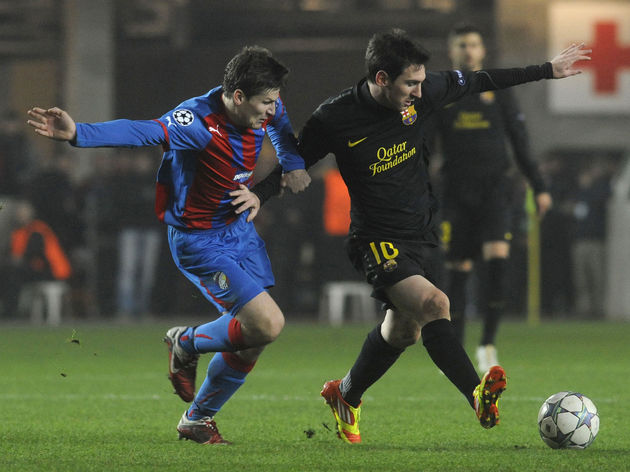 The Argentine, and current fifth best player in the world (it’s official, UEFA said so), scored a hat-trick on his last visit to Czech Republic, when he scored three against Viktoria Plzen in November 2011.

No player has ever scored two away hat-tricks in one country in the Champions League.

In contrast, Slavia Prague ‘bagsman’ Nicolae Standiu has taken 10 shots without scoring in the Champions League so far. Only Robert Lewandowski (16) has had more shots than the Romanian, but the Pole has scored five of those.

It looks like the Czech side have a serious challenge on their hands if they are to get anything from this game.