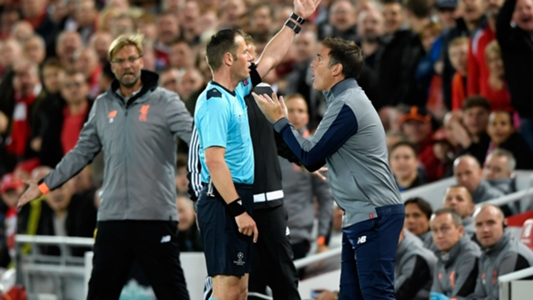 Sevilla coach Eduardo Berizzo explained the intriguing logic behind the actions that led to his dismissal in Wednesday’s 2-2 Champions League draw with Liverpool.

Berizzo had already been warned by referee Danny Makkelie for throwing the ball away in the first half when he did the same again after the break, meaning he was sent to the stands.

But he had his reasons for repeating his actions and he thinks the whole thing can be put down to a misunderstanding.

“It was two different actions,” he said. “In the first half when we were winning, Liverpool were on the counter-attack and I did something that wasn’t right, I threw the ball away. I was trying to waste time, to stop Liverpool.

“I realise that was a mistake. However, in the second half a similar thing happened when we were losing and I still decided to throw the ball away to try to make up for what I did in the first half.

“I was doing the sportsmanlike thing – it was the same action, different context. You could construe both as unsportsmanlike, but I was trying to make up for it.

“I explained that to my counterpart [Liverpool boss Jurgen Klopp] and he understood, but the only one who didn’t was the referee.”

Berizzo’s side secured a point at Anfield after Joaquin Correa added to Wissam Ben Yedder’s early opener, which had been eclipsed by goals from Roberto Firmino – who also missed a penalty – and Mohamed Salah.

The 47-year-old was satisfied to secure a share of the spoils against what he considers to be dangerous opponents.

“It’s a good way to start the group stages,” said Berizzo. “We found it tough in the first half. We went ahead, but when we went behind we found it tough. They were very positive, very quick.

“We were struggling either side of our defence to control the speed of their attacks.

“Second half we managed to stop their progress down each side and we were very solid.

“I think the result stands us in good stead for the group stage.”