Barcelona’s second-string side were held to an uneventful 0-0 draw in La Liga by basement side SD Huesca on Saturday.

The visitors tested the home side early on as Ousmane Dembele’s effort was saved by Roberto Santamaria, before the Huesca goalkeeper was on hand once more to tip over a Jeison Murillo header from the resulting corner.

?Barcelona’s heavily rotated side dominated possession but looked almost content to hold out for a point which saw them move 12 points clear at the top of the table, as even the likes of Philippe Coutinho failed to have a telling influence after being brought on in the second half.

With only Marce-Andre ter Stegen keeping his place from Barcelona’s Champions League exploits in midweek, Ernesto Valverde’s heavily rotated team selection on Saturday was always going to be under scrutiny.

With an 11-point lead at the top of the league heading into the game, Barcelona made ten changes to their team from the 1-0 win over ?Manchester United on Wednesday, with stars including ?Lionel Messi and ?Luis Suarez left at home.

Barcelona starting without their best striker Leo Messi and finding a way to gain their victor against Huesca at Estadio El Alcoraz. While new youngsters playing this match.#LaLigaSantander #laliga #Barca

The ball was fed forward to the front two at a plentiful rate, but Barca’s second-string attackers simply lacked the cutting edge, star quality and telepathic understanding which are usually provided by the more senior statesmen in attack. Malcom, too, was largely anonymous throughout the game. 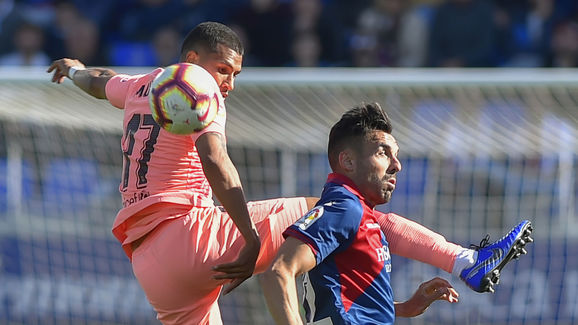 STAR MAN – In amongst a heavily rotated side, in which some of Barca’s players struggled to replicate the quality of the players they replaced in Ernesto Valverde’s side, Riqui Puig was the star of the show.

Barcelona are likely to return with a more familiar look to their team as they host ?Manchester United in the second leg of their Champions League quarter final clash on Tuesday, before taking on Real Sociedad next time out in La Liga.