Real Madrid 2-3 Barcelona is part of 90min’s 20 Greatest Matches of the Decade series. Follow the rest of the series over the course of the next week.

Anything in the world can get boring with repetition. Familiarity, ?the saying goes, breeds contempt. So in April 2017, when Lionel Messi was gearing up for his 34th Clasico, the 174th edition of the fixture in La Liga alone, the 31st Clasico of the decade…it could’ve felt more special.

Fans at the Bernabeu were being treated to the two best players in the world facing off against each other…for the 32nd time in their careers. If Real Madrid won, they would all-but seal their 33rd Spanish title. If Barça won, they would stay alive – with five games remaining – in the race for their 25th.

Barcelona came into this game in, if not crisis, then close to it. Luis Enrique announced that he’d be stepping down as manager at the start of March, shortly after a staggering 4-0 defeat to Paris Saint-Germain. They came back with an even more staggering 6-1 win in the second leg of that tie, making it through, but didn’t score a single goal in two legs against Juventus the following month. 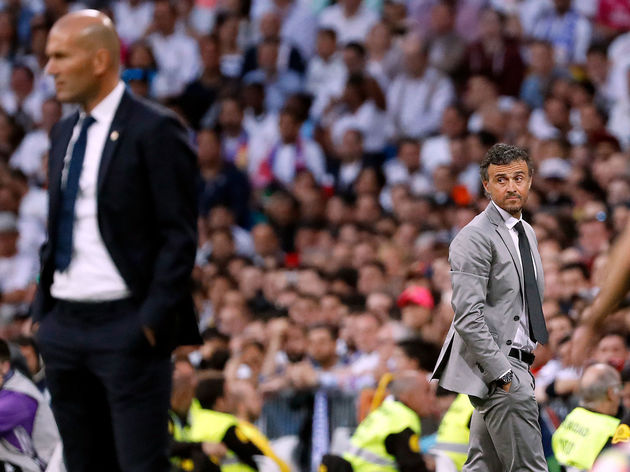 Defeat earlier in the month at La Rosaleda put Enrique’s side, their fans’ support wavering, six points back in the title race. Worse, Neymar was sent off in that game in Andalusia, leaving him sitting at home watching TV while his teammates went to Madrid to fight for their lives. He would never play another Clasico, moving to Paris Saint-Germain in a world record transfer just three months later.

Real, meanwhile, were riding the crest of a wave. Club World champions and Champions League holders, they’d just fought past an excellent Bayern Munich side to make the semi-finals of the Champions League for the seventh season in a row.

Zinedine Zidane, the magic man, the whirling dervish on the sidelines, ripping his trousers in celebration on at least one occasion, had an astonishingly deep squad – to the point that he didn’t bring Cristiano Ronaldo to an away league game for 60 days between mid-March and mid-May. In the four games he missed, Real scored 17 goals. Unsurprisingly, they won all four. On a Sunday night in Madrid, the reigning world’s best player warmed up; rested, fit and motivated to secure just his second Spanish title at t

The Clasico should’ve been his coronation, his chance to stamp his authority on the one game that mattered the most, against the only man who could even reach his orbit.

You’ve seen the score. You know that didn’t happen. Instead, with the juggernaut of momentum about to hit him full force, Lionel Messi flipped the narrative.

The game was all about the Argentine freak of nature from almost the first whistle, before either side had scored, when a swinging elbow from Marcelo caught him square in the mouth. Crimson dripping through his beard, Messi got up. Marcelo stayed on the pitch. The game started in earnest.

…And Real went 1-0 up through Casemiro, because there weren’t already enough South Americans making this game about them. The equaliser, just five minutes later, was one of the purest expressions of Messi ever seen. He started the move – of course he started the move, he always starts the move – with a simple pass to Sergio Busquets and a surge forward. Busquets fed Rakitic, who cut the ball back across the front of the box rather than sticking it into the corridor between goalkeeper and defenders, where Luis Suarez and another teammate were arriving.

That first touch took him past Luka Modric. The second, on his right, took him around the despairing Dani Carvajal. Those two touches took him from the edge of the D to the penalty spot, and his third passed it beyond Keylor Navas. It was Messi distilled. The teammates deferring to him at the cost of better chances, him spinning gold out of flax when made to stretch for a simple pass, the finish – the calmest of finishes – never over-hit, just placed. Placed better than anybody has ever been able to place a ball.

Time resumed, and a football match between mortals kicked off again. Gareth Bale, ever all-too mortal, went off injured before the half-time whistle blew, leaving each side minus one fragile, brilliant star. Ivan Rakitic scored to put Barça ahead with about 20 minutes to play, and when Sergio Ramos was sent off for a reckless lunge on Messi (of course it was Messi), the game looked done and dusted. Then in the season of Real Madrid’s subs, their backups, their unwanted men, James Rodriguez came off the bench in the 82nd minute and scored. The Bernabeu rocked, Real’s six-point lead was restored, flowers bloomed and summer arrived on the Iberian peninsula.

A fast break from the back, a gut-busting run by Sergi Roberto, Messi running away from the crowd, sideways rather than forward, not going to where the ball should have gone. A dart. A dash. A shark smelling blood, he filled the hole left by the forward surge of three Barcelona players and three men in white.

Messi, on the run, with his first touch, with the greatest left foot to grace the game, passed the ball into the only part of the goal Keylor Navas couldn’t reach. He took off his shirt, raised his name and number to the crowd – if you wanted to draw contrasts at this point, you can look at Ronaldo’s celebrations, where his unadorned torso if the focal point, and then back to Messi’s, where the reverence is given to the shirt – and made the sign of the cross. It’s still not clear why. That night at the Bernabeu, in enemy territory, there was only one person being worshipped. The beautiful tragedy of the game became clear at the end of the season. One of Messi’s defining moments, all for nothing. That defeat at La Rosaleda 15 days previous had put the title beyond reach, as Real’s B-team won all of their remaining fixtures (including on the last day, at Malaga) and the title returned to the capital.

Barcelona ended the season with the Copa del Rey and Ernesto Valverde. Real ended it with the league and cup double. But for one holy night in Madrid, the trophies didn’t matter, and Messi reigned again.

Roma 3-0 Barcelona: The Night Roma Rose From Their Ruins

Liverpool 4-3 Borussia Dortmund: European Nights at Anfield Don’t Get Much Better Than This

Napoli 2-4 Lazio: The 90 Minute Champions League Shootout That Had it All

Watford 3-1 Leicester City: From Dejection to Delirium in 18 Extraordinary Seconds

Chelsea 2-2 Tottenham: The Battle of the Bridge Which Gave Leicester the Premier League Title

England 1-1 Colombia (4-3 Pens): When the Three Lions Made a Divided Country Believe

Porto 2-1 Benfica: When the Primeira Liga Was Decided With One Game to Spare

Liverpool 0-2 Chelsea: The Slip Heard Around the World

?Ajax 2-3 Tottenham: The Night All Football Logic Went Out the Window