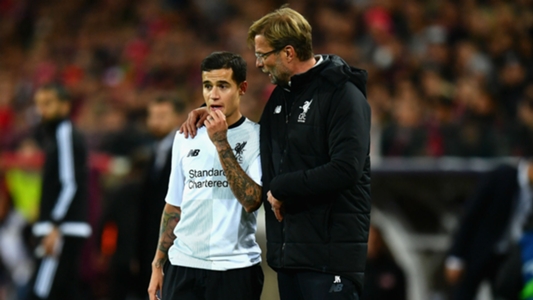 Jurgen Klopp insists seeking a like-for-like replacement for Philippe Coutinho was never part of Liverpool’s transfer plans this close-season because such a player does not exist.

Coutinho joined Barcelona in a blockbusting £142 million ($193m) deal in January but his departure did little to check Liverpool’s progress under Klopp as they sealed a top-four spot in the Premier League and reached the Champions League final.

The funds raised from the Brazil playmaker’s sale have been handsomely reinvested from the mid-season signing of centre-back Virgil van Dijk onwards.

Fabinho and Naby Keita, the latter a pre-agreed signing from RB Leipzig, will bolster Klopp’s midfield for the coming campaign, while Xherdan Shaqiri provides another creative attacking option.

Brazil goalkeeper Alisson joined Van Dijk in becoming the most expensive player in history in his position but Liverpool have not specifically recruited anyone to step into Coutinho’s shoes, nor looked likely to since their bid to bring in Nabil Fekir from Lyon collapsed

“He’s Phil Coutinho. He has a specific style of play, tactically an outstanding player. He can play as the winger, the 10, the eight – really great.

“I don’t want to put one of my players in the position where people will say constantly, ‘He’s the Phil replacement.'”

Klopp is understandably proud of Liverpool’s performances from the second half of last season which, along with the impressive raft of recruits, has many tipping them for a sustained title bid this time around.

Nevertheless, the former Borussia Dortmund coach allowed himself to wonder how May’s Champions League defeat to Real Madrid might have played out had Coutinho still been at his disposal after injury struck talisman Mohamed Salah.

“I think the biggest thing we did in the second half of last season was that we didn’t need to speak too much about Phil,” he explained.

“That wasn’t clear in January. How could we have known that? If we still had Phil then we could have played him in the Champions League final and, when Mo [Salah] goes out injured, Phil goes on the left wing, Sadio [Mane] to the other side and bring a midfielder on.

“Then it’s a different story. That would have been nice but he wasn’t here and we wish him well.”

Klopp added: “We don’t need to replace Phil. We need to make a squad for the next year. Out there in the market, there isn’t a Phil Coutinho-light. He’s not there. But there are a lot of good players and we have brought a few of them in.”