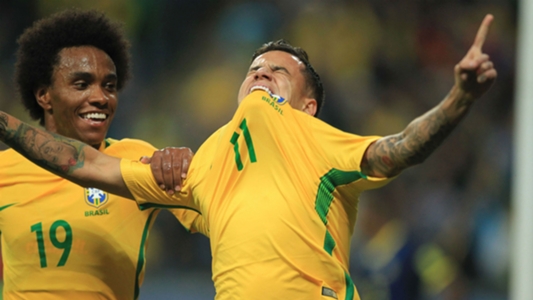 Philippe Coutinho is struggling to come to terms with the “sadness” of Liverpool refusing his transfer to Barcelona, according to Brazil team-mate Neymar.

The Reds star was keen to move to Camp Nou,  handing in a transfer request in August ahead of the Premier League season beginning in order to try and force the situation.

Barcelona remain determined to add Coutinho to their squad but Liverpool have no intention in selling the 25-year-old, despite him making it clear to those at the club that he wants to leave.

Coutinho missed Liverpool’s 4-0 victory over Arsenal last weekend due to a back problem but featured as a substitute in Brazil’s 2-0 win over Ecuador on Thursday, scoring his country’s second of the evening.

According to Neymar, who left Barcelona in a world record €222 million transfer to Paris Saint-Germain last month, suggested that Coutinho was unable to enjoy the occasion.

“Unfortunately, instead of being a happy time for him [Coutinho], for his family, it’s a moment of anguish, disappointment and sadness,” Neymar told ESPN FC.

“I like to see him happy because he is a team-mate and a friend that I’ve had for a long time.

“He was rewarded with a goal today, for his and our joy.”

Coutinho remains under contract at Anfield until 2022.