Lionel Messi has revealed he chose to join Paris Saint-Germain after leaving Barcelona as he believes they offer him the best chance of winning the Champions League for a fifth time.

The six-time Ballon d’Or winner also admitted his former Barcelona team-mate Neymar helped to persuade him to move to PSG when it became clear his time at the Nou Camp was at an end.

Messi signed a two-year contract with PSG on Tuesday, just days after Barcelona announced he was leaving the club he joined 21 years ago. 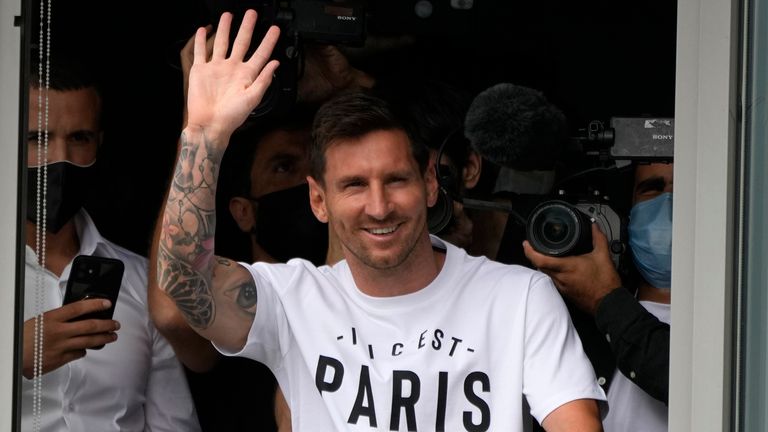 But despite the upheaval, the forward says he is now focused on bringing success to the French capital – particularly in the Champions League, which has proved elusive so far.

When asked if PSG – who were runners-up in 2020 – could make the final step, Messi said: “I think this team is already done and ready.

“There are some new transfers but they have been very close and they are ready.

“I just came here to help – I’ll give my best. My goal and my dream is to win this trophy again and I think that Paris is the best place to have a chance to win it again. 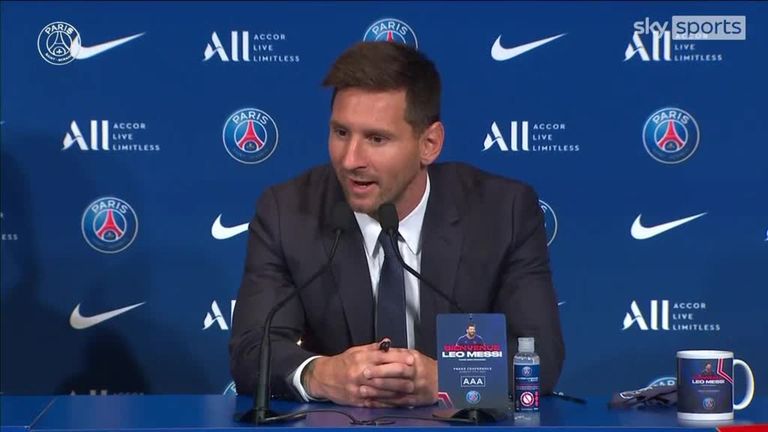 “It’s not easy. Sometimes you can have the best team in the world and you don’t win the Champions League – this is football.

“Paris has been so close to a victory in the Champions League. In the best competition, the best teams are playing.

“It’s very difficult to win it. You need a very united squad. This dressing room is very united but you also need luck.

“It’s a very special competition and that’s why it’s so beautiful and so important – we all want to win this competition.” 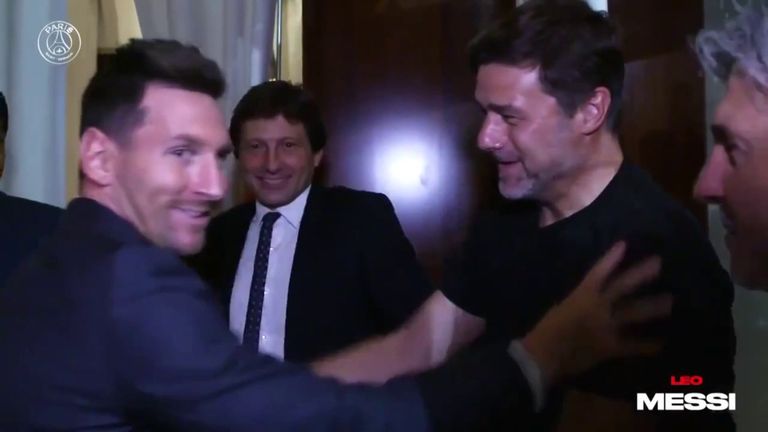 Messi’s most recent triumph in the Champions League came in 2015, when a Barcelona team spearheaded by him, Neymar and Luis Suarez beat Juventus in Berlin.

Neymar celebrated his reunion with Messi on social media on Tuesday, and the Argentine admitted the Brazil forward had played an influential role in his decision to move to PSG, as well as his countryman and new manager, Mauricio Pochettino.

“I’ve got some friends here in the dressing room,” Messi said. “When you see the squad you really want to play with them.

“We had contact and Neymar, of course, did a lot and was important.

“The whole dressing room and the staff had an influence on my decision. When we saw it was possible, the first thing we did was talk to them and Pochettino. We’ve known each other for a long time and we are close, in a way.

“It’s been very easy since the very beginning. All the squad and the staff did a lot to help me choose this club.”

While Messi will be playing professional football for a club outside of Spain for the first time in his career, there is the potential for PSG and Barcelona to meet in the Champions League. 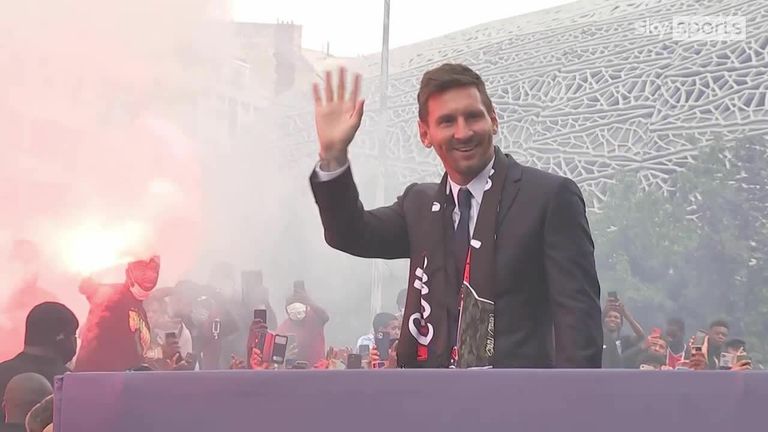 That scenario would bring about an emotional reunion between Messi and his former club, and would also offer him the opportunity to say goodbye to the Barca fans that were unable to witness his final season at the Nou Camp due to coronavirus restrictions.

“Barcelona is my home, I’ve been there since I was a kid,” said Messi. “I’ve lived so many things there – good and bad.

“I don’t know if we are going to face each other. It would be very nice to go back to Barcelona. I hope it will be with the fans.

“It would be very strange to play there with another shirt, but it can happen.”

PSG president: We can afford Messi

PSG president Nasser Al-Khelaifi was delighted to present Messi as a new PSG player and promised the club were able to afford their new signing – unlike Barcelona. 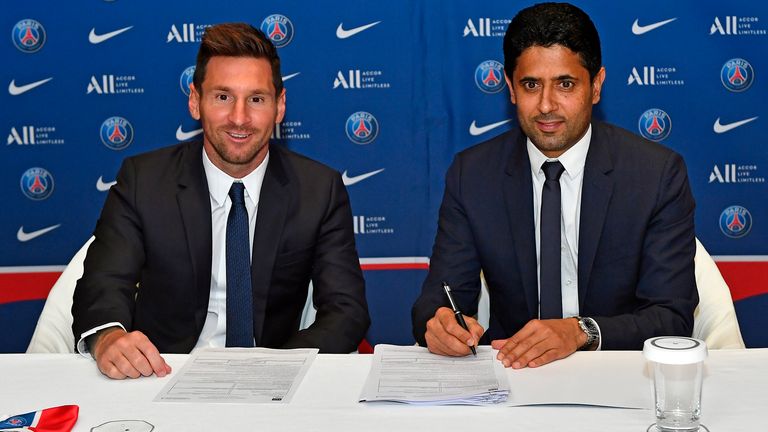 Messi was set to sign a new five-year contract with the Spanish club this summer but they were unable to finalise the deal within La Liga’s financial limits.

It meant that Messi – whose offer to reduce his salary by 50 per cent was still not enough to keep him at the Nou Camp – became a free agent and allowed PSG to make their move.

Messi’s deal is worth £25m per year after tax – plus bonuses – and includes a £25m signing-on fee, while it also follows the summer arrivals of Gianluigi Donnarumma, Achraf Hakimi, Sergio Ramos and Georginio Wijnaldum at the Parc des Princes. 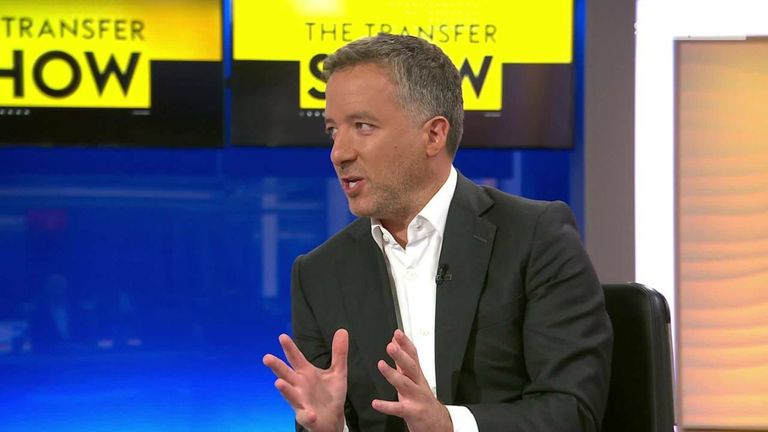 But Al-Khelaifi – who is also the chairman of the European Club Association – said: “We followed the financial fair play regulations since day one when we started, and until the end, we’re going to always fulfil the regulations.

“Before doing anything, we look with our commercial people, our financial people, legal people.

Messi’s arrival provides the prospect of seeing him line-up alongside Neymar and Kylian Mbappe, although the France forward’s contract expires at the end of the season. 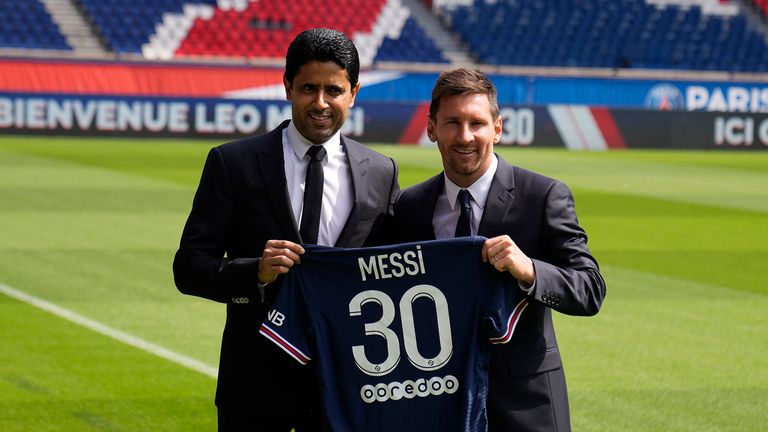 However – despite reports linking him to Real Madrid – Al-Khelaifi says Mbappe has no excuse to leave PSG, insisting: “I think everybody knows the future of Kylian.

“He’s really a competitive player. He wants to win trophies – he’s said it in public.

“He can’t do anything else but stay.”

‘PSG are now the glamour club’ 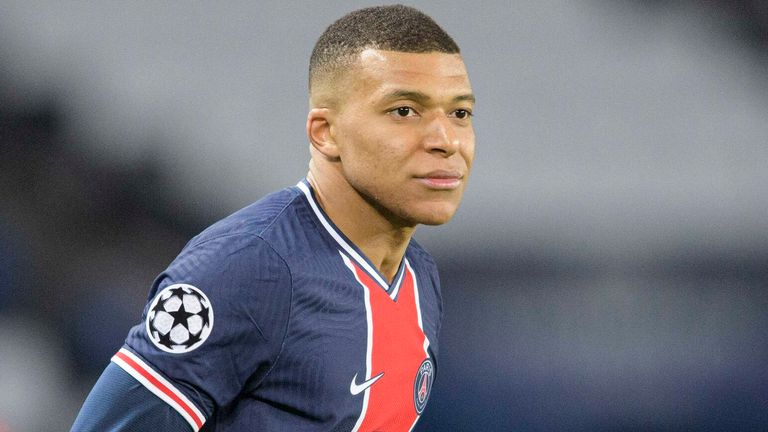 Dharmesh Sheth says Messi’s arrival could help convince Mbappe to extend his deal at PSG, which currently runs out at the end of next season

“I think PSG are now the most glamorous club in the world. They have Messi, Neymar, Mbappe and also the finances they have in place. Effectively, we’re seeing the Spanish and Italian clubs being left behind and some English clubs.

“In this new football eco-system, what you need to thrive and be the biggest and the best is to be effectively owned and backed by a state – that’s what Man City and PSG have.

“Spanish football has big problems, Real Madrid and Barcelona have massive debts and now we’ve seen PSG say ‘we are going to be the club of the Galacticos’.”

“From Messi’s point of view, this has come at a fantastic time for him. I know it’s a wrench leaving Barcelona and he is probably going to earn less money in Paris, but I think he needed a chance and so did Barcelona.

“They couldn’t keep paying Messi what they were paying him. He’s got a new challenge, it’s a whole new world of opportunities, most of which will be backed by the Qatari state.

“He’s going to win lots of trophies, his image is going to become even bigger. Next year is the World Cup in Qatar and he is going to be one of the faces of the tournament. For the rest of his life, he’s going to have a very lucrative relationship with Qatar.

“I’m sure the people of Paris will love him and he’ll enjoy living and working in France. I just worry about some of the other clubs in France, but overall for the whole profile of French football, it raises it to another level.”