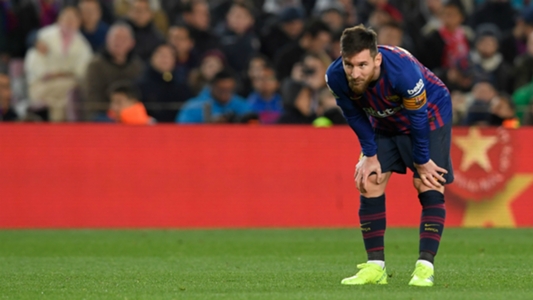 Lionel Messi has insisted Barcelona never contemplated throwing away the Copa del Rey after a comeback win over Sevilla on Wednesday .

The La Liga leaders crushed Sevilla 6-1 at Camp Nou to claim a 6-3 aggregate victory in the quarter-finals, with Philippe Coutinho scoring a brace to go with goals from Ivan Rakitic, Sergi Roberto, Luis Suarez and Messi.

Messi, who recently revealed criticism he receives from son Thiago , played down any suggestions Barca were ever going to simply give up the competition to focus on La Liga and the Champions League.

“It was said that we threw the cup or that we didn’t want it, or maybe my message was misinterpreted at the beginning of the season,” he told Barca TV .

“The team want to fight for the three competitions, as it is always Barcelona’s obligation every year.

“We do not throw anything.”

Leo #Messi : “We are Barça and we would never throw away the chance to win any of the big three competitions”
#CopaBarça #ForçaBarça pic.twitter.com/hHJeRCAMXh

Coutinho started Barca’s comeback with a 13th-minute penalty, which Messi let the Brazilian – whose form has been questioned – take.

Messi explained his decision to allow the 26 year old, who completed his brace in the second half, to take the spot-kick.

“I wanted him to kick it and we fixed it, because the important thing was to win,” he said.

“He scored and I’m happy because that’s where everything started.”

Coutinho thanked Messi after the game for letting him take the penalty as the Catalans sealed their place in the Copa del Rey semi-finals.

While Barcelona won on the pitch on Wednesday, they took a tumble off it as they accidentally confirmed Denis Suarez’s move to Arsenal  prematurely.