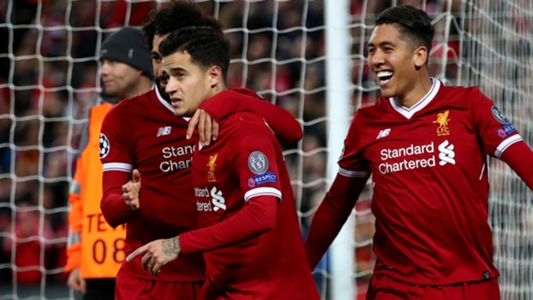 Philippe Coutinho’s night against Spartak Moscow could hardly have gone better — it started with an Anfield record and resulted in a memorable first for the attacker.

With Liverpool needing a result to secure qualification into the knock-out stages, Coutinho picked up his first-ever Liverpool hat-trick in a 7-0 win in the Champions League Group E finale.

It started just four minutes in as Mohamed Salah was brought down in the area for a penalty. Coutinho stepped up and converted the spot-kick — the fastest goal ever scored at Anfield in a Champions League match.

Coutinho notched Liverpool’s second not long after, completing a nice team move by sliding a pass from Robert Firmino past the keeper and inside the far post.

The Brazilian’s night got even better early in the second half when he scored once more off a deflection to complete his hat-trick, his first in a Liverpool shirt, and the Reds’ fifth on the evening.

Coutinho wasn’t the only Brazilian to have himself a night. Roberto Firmino also enjoyed his evening, assisting on Coutinho’s second and then getting a goal himself for Liverpool’s third.

Firmino’s goal was the sixth of this year’s group stage. That mark is the most a Liverpool player has scored in the group stage.

6 – Roberto Firmino has scored six goals in the Champions League this season, the most by a Liverpool player in a single group stage campaign in the competition. Stage. pic.twitter.com/pOrnBgkkZa
— OptaJoe (@OptaJoe) December 6, 2017

The victory means Liverpool win the group and will head to the Champions League knock-out stages for the first time since the 2008-09 campaign.