?In the emotional wreckage of this week’s ridiculous pair of Champions League semi-final second legs, it’s easy to forget about the narratives that were being pushed before they began.

Lionel Messi was officially the GOAT’s GOAT and Ajax were the new ‘World’s Team’, kitted out with a style of football fit for their stadium’s legendary namesake and players who would likely go on to emulate the great man (I’m talking about Johan Cruyff by the way, not some corporate creep named Amsterdam Arena).

One man, Frenkie de Jong, was already guaranteed to complete Cruyff’s most famous journey – no, not LA Aztecs to Washington Diplomats – from Amsterdam to ?Barcelona, and his fellow academy graduate and Netherlands international Matthijs de Ligt could be set for a similar trajectory, if rumours are to be believed. 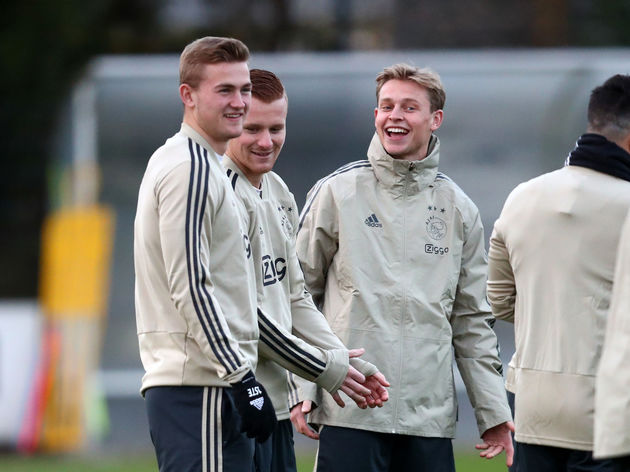 And, primed for the probable final between these two historically linked sides, the think pieces on de Ligt and de Jong and their futures were parked, because how on earth could two teams blow three-goal leads two days in a row?!?!?!?

But then Divock Origi happened twice, ditto Gigi Wijnaldum and then Lucas Moura happened, three times, and here we are, robbed of our chance to both romantically reminisce and furtively glance at the bright, bright future.

Except, let’s skip the de Jong bit, and the Barça bit, and the romanticising of yonder-year, and focus on the wondrous talent of this 35-year-old masquerading as a 19-year-old at the back. This wee baby boy who has captained Ajax to their greatest ?Champions League campaign this century, at the youngest age of any leader in the competition’s knockout round history. This stoic toddler, who became the first ever defender to win the Golden Boy award.

Despite being just a teenager, de Ligt has a storied list of such accolades, though the majority of them are naturally prefaced by ‘youngest’ or, very occasionally, ‘second-youngest’. For example, he is the youngest ever player to start (hell, even play) in a major European final, when he took on Manchester United at just 17 in the Europa League final of 2017 (look at that numerical symmetry).

They’ve been dead and buried about 50 million times in the Champions League this season, but here we are. Difficult to properly sum up the varying emotions Tottenham fans have experienced over the last 24 hours.

Some words for @90min_Football below. ?https://t.co/qhgovYHbFn

In the same year, he became the youngster player to make his debut for the Netherlands national team since 1931. A year prior, he had become the second-youngest player, behind the venerable Clarence Seedorf, to score for Ajax, though when you take into account his position, he assumes the role as outright young gun once more.

But he’s more than that. So much more. It almost goes without saying, but it should still be said over and over, he’s outrageously composed. In fact, he’s so composed, it could spark a resurgence of the phrase ‘so composed for a young man’ to the levels of ‘good touch for a big man’, which, incidentally, at 6ft 2in (and still growing, surely?!?!?) he certainly qualifies for.

I know it’s not exactly analytical to keep harking on about his age, but it is his distinguishing factor, and it becomes terrifying when you consider that his current height (at least per Wiki) could still increase. And, even if it doesn’t, every other bow in his armoury will.

It’s genuinely frightening, as is his presence on the pitch. The first thing that strikes you about de Ligt when you watch his highlight reel (or indeed any full 90 minutes he plays) is his decision making. The balance he strikes between flying in with gusto and standing strong is – yes, for such a young man – astonishing.

Because he is completely unafraid of flying in, when necessary, and appears to relish doing so, yet knows exactly when to stand his ground. He is accomplished on the ball, sufficiently confident, but not too confident, as a certain number of his contemporaries are, and in this sense you get the feeling he gets far more out of a lofted boot out of the penalty area than he does a caressed pass, even if he’s versed in both.

He is wildly vociferous, but in an endearing and earned way, not a look-at-me-I’m-12-and-can-shout kind of way.

And, as is customary, nay, necessary as a modern centre back, he is technically sound at the other end. Yes, his headers have caught the eye in Europe, but he’s not scared of having the ball at his feet, either, as his skinning of a defender and subsequent rasping cross in against Spurs showed, or his four assists. Indeed, for all the heartbreak of Wednesday night, as Glen Hoddle alluded to on BT Sport, the mistakes (not many of which were actually his, it must be said) of the second-half and the way they were capitalised upon will do nothing but good for the Dutchman in the long run.

He will rise again, adorned in different colours, and he will hold the Champions League trophy, alongside many others, aloft, because he really is the centre back of the future… he’s just more than ready today.