In the summer of 2017, then Boro boss Garry Monk was the envy of all ?Championship managers as chairman Steve Gibson provided the former Swansea manager with a £50m transfer war chest. The objective was simple – get the north-east club back in the Premier League.

Braithwaite arrived at ?Boro as one of their marquee signings, as the Teesiders lured the Denmark international to the second tier of English football for a princely £9m.

The early signs seemed positive, as Braithwaite courted the Boro faithful with everything they wanted to see – visiting Teesside hotspots to have a parmo (google it, you won’t be disappointed), even laying claim to the number ten shirt and comparing himself to Riverside cult hero Juninho. Despite being tipped among the favourites for promotion following their summer transfer splurge, Boro’s performances on the pitch were unimaginative and lacklustre. Just six months into the job, the man who brought Braithwaite to the club, Monk, was relieved of his duties, with the side struggling down in ninth place.

Boro’s Achilles heal was a lack of creativity and, given the large transfer layout, Braithwaite understandably shouldered much of the blame from the Riverside faithful. But the fact is this – Braithwaite was not a Championship player.

The former Toulouse man was at times head and shoulders above his colleagues. Great technical ability, good first touch, constantly on the move, Braithwaite had all the qualities to be a fantastic player for the club, but the players around him just weren’t on his level. The arrival of Tony Pulis was the final nail in the coffin for Braithwaite’s time on Teesside. What the forward had in technical ability and nous, he lacked in physicality, and in a Tony Pulis team in the Championship, even his new work colleague Lionel Messi would struggle to express himself.

Pulis, the man who once deemed ?Bayern Munich’s Serge Gnabry not good enough for West Brom, soon shipped Braithwaite off on loan to Bordeaux and then again to Leganes, before he was eventually sold to the latter. 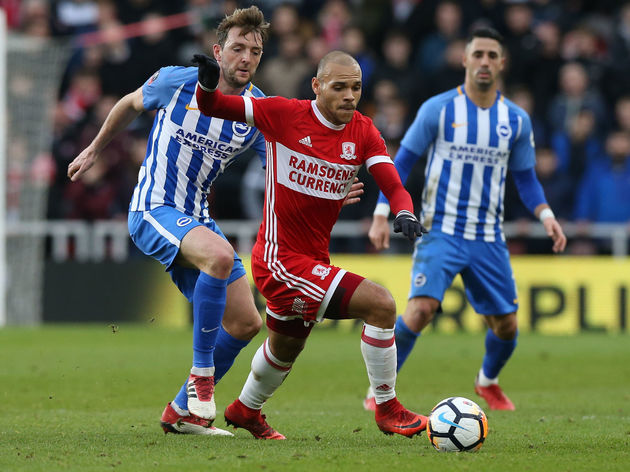 The fact of the matter is some footballers just can’t cut it in certain leagues. Mesut Özil has looked a superstar at times in his career, but in a fast-paced, physical Premier League he’s non-existent at times. Martin Braithwaite is the Championship’s answer to Özil, all the quality in the world, but not tough enough and at times doesn’t have the fight in him.

In a less physical ?league and a ?Barcelona team who seldom lose the ball, Braithwaite could flourish. Not quite one to be chalked down as another Tony Pulis mistake, but although he didn’t do himself many favours at Boro, his villain-status among fans is perhaps a little unwarranted.