??Marc-Andre ter Stegen has criticised his Barcelona teammates following their unconvincing 2-1 win over Slavia Prague in the Champions League.

The German stopper had to be on top form to keep out the Czech team as a poor Barcelona defence was in danger of throwing after three crucial points in Group F.

A ?Lionel Messi goal and an own goal from Peter Olayinka was enough for ?Barcelona to see off a game Slavia side as they went three points clear at the top of the group. 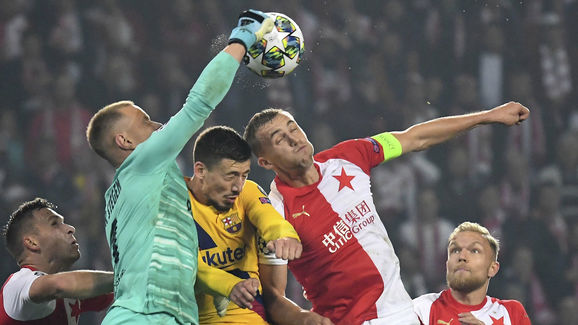 However, this was far from the prestige Barcelona that we would expect, and Ter Stegen had to keep the Slavia Prague onslaught out as their opponents created a number of excellent goalscoring chances in the 90 minutes.

Talking to ?Movistar Plus after the match, ?Ter Stegen said: “We did not play at the level we wanted but thankfully we got the three points, which is the most important thing.

“It is necessary to talk about some things. We have to do it between ourselves, I will not say it here, but there are things to improve – a few of them.”

Barcelona neglected improving much of their defence over the summer window, opting to only sign Real Betis’ Junior Firpo as cover for Jordi Alba. Ter Stegen has had to be his best all season to ensure Barcelona are in a position for fight for the Spanish title.

“This is an internal matter as well, I don’t want to do it here,” Ter Stegen said when asked about his opinion on manager Ernesto Valverde. “I would like to talk to those who were on the field first. They scored against us right on the first chance of the second half. This can’t happen to us, I was quite alone.”

Barcelona’s defence has been questionable all season, only keeping three clean sheets in comparison to Atletico Madrid’s six. It will be interesting to see now whether Valverde does change his tactics or his back four when Barcelona Real Valladolid in ?La Liga this weekend.

Nevertheless, Barcelona did get the job done and are now three points clear of Borussia Dortmund after they lost 2-0 at the San Siro to ?Inter. But they will have to improve if they are to truly challenge for both the ?Champions League and La Liga.