Barcelona travel to Manchester United for the first leg of their Champions League quarter final tie on Wednesday.

Barça eventually eased past Lyon in the round of 16 with a 5-1 win at Camp Nou, after a well-contested 0-0 draw in the first leg.

Ernesto Valverde’s side are in fine form and will take to the field at Old Trafford on the back of a 2-0 win over ?Atletico Madrid in La Liga.

Fans of the Spanish champions will be buoyed by the return of ?Ousmane Dembele, who has missed four games with a hamstring injury, but it remains to be seen whether the 21-year-old will be thrown straight into the starting lineup against United.

Here’s how ?Barca could lineup against the Red Devils on Wednesday. Marc-Andre ter Stegen (GK) – The German keeper has been in superb form in what’s arguably been his best season at Barcelona, as he continues to establish himself as one of the world’s best.

Sergi Roberto (RB) – The 27-year-old has played all over the pitch for Barça but it’s at right-back where he’s excelled, putting himself ahead of Nelsen Semedo.

Gerard Pique (CB) – ?Pique will return to Old Trafford to face his former club, having lifted the big-eared trophy for both sides.

Samuel Umtiti (CB) – Has only made one Champions League appearance this season, during which he picked up a red card, but Umtiti has returned from a knee injury and could replace Clement Lenglet alongside Pique.

Jordi Alba (LB) – On his last visit to England against ?Tottenham in the group stages, Alba assisted three of Barça’s four goals at Wembley Stadium. Sergio Busquets (DM) – The three-time Champions League winner is in line to make his 103rd appearance in the competition.

Ivan Rakitic (CM) – ?Rakitic will be hoping for a repeat of his last appearance against Premier League opposition, when his superb volley flew past Spurs keeper Hugo Lloris in October.

Arthur (CM) – Arthur is yet to complete a full 90 minutes in La Liga this season but he has started five of Barcelona’s eight European games. 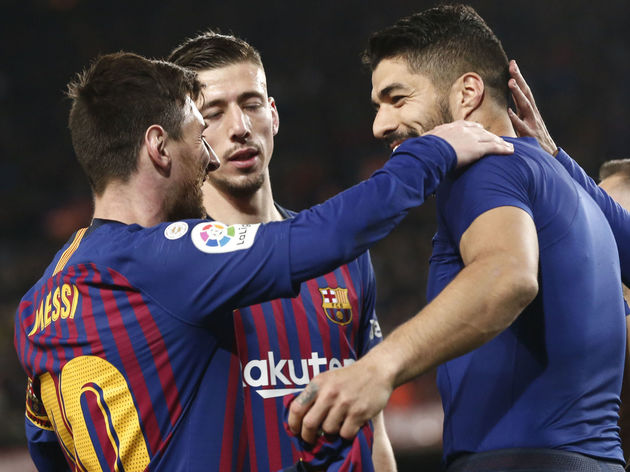 Lionel Messi (RW) – His cute finish against Atletico on Saturday was his 43rd goal of the season, in just his 40th appearance.

Luis Suarez (ST) – ?Suarez was also on target on Saturday, as he prepares to return to the ground where he’s sure to be public enemy number one thanks to his spell at ?Liverpool.

Malcom (LW) – Philippe Coutinho continues to stutter at Camp Nou, which could give Malcom an opportunity to start following a goal and two assists in his last three games.