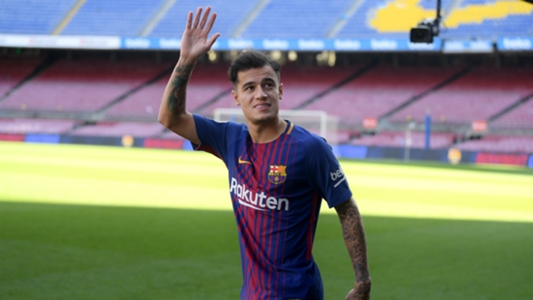 Georginio Wijnaldum feels Manchester City and Liverpool’s other Premier League rivals are fortunate Philippe Coutinho has been sold to Barcelona.

The Brazil international moved to Camp Nou this month for a fee that could reportedly rise to £142 million.

Former Inter playmaker Coutinho had been a key figure for the Reds, who must now face the challenge of hosting runaway Premier League leaders City at Anfield on Sunday without the departed star.

“They are lucky, yes,” Wijnaldum said of Pep Guardiola’s side.

“I think every top team is probably happy he left for another team in another country.”

According to Wijnaldum, Liverpool boss Jurgen Klopp is trying to take a relaxed approach in his attempts to compensate for the absence of Coutinho.

“He [Klopp] is not saying you have to step up now or do this or that, he just wants us to enjoy the game and try to do our best,” the Dutch midfielder said.

“The manager is not the kind of manager who will put that kind of pressure on players.

“The only pressure the manager puts on us is that we have to give 100 per cent and try to use the quality we have. It’s not that I think I now have to go on and think I am the best man and number one.”

And it is not just on the field where the loss of Coutinho will be keenly felt, Wijnaldum speaking highly of the 25-year-old’s character and popularity.

“To be fair it is still strange, I think we still have to realise he has gone,” he said. “A quality player like Phil, every team will miss a player like that if they leave.

“He was a really nice guy to work with, that is why we are happy for him that he can make the move, but also sad that he didn’t stay because with Phil in the team, you are a better team of course.

“He was one of the best players we had in the team but as a person he was maybe even the best.