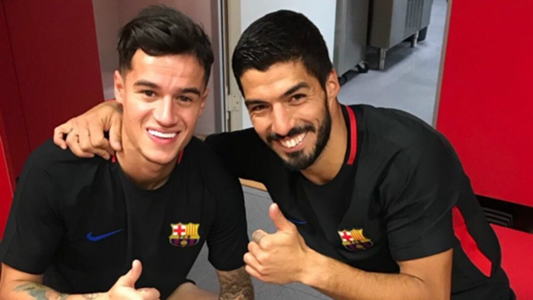 Luis Suarez has vowed to help Philippe Coutinho achieve his dreams following his transfer from Liverpool to Barcelona.

The Brazil star finalised his move to Camp Nou on Monday, signing a five-and-a-half-year contract after a reported fee of €160 million was agreed between the clubs.

Suarez, who played alongside Coutinho at Anfield until he joined Barca in 2014, is looking forward to great success with the playmaker after being reunited.

Writing on Twitter alongside a picture with Coutinho, Suarez said: “Welcome my friend, how nice [it] is to share [a] team with you again.

“Lots of success in this new stage [sic], we will achieve them all together!”

WELCOME my friend @Phil_Coutinho  how nice is to share team with you again  Lots of success in this new stage, we will achieve them all together! pic.twitter.com/fTpYn4wS6d

Coutinho had earlier met Gerard Pique and Paulinho on his first full day at the club.