Liverpool’s owners, Fenway Sports Group, have been blasted for selling Philippe Coutinho, with Christian Purslow pointing out that “fans don’t care about bank balances, they care about winning”.

The Reds bowed to pressure from La Liga giants Barcelona during the current transfer window as they sanctioned the €160 million sale of a prized asset.

Coutinho had expressed a desire to complete a “dream” move, but questions have still been asked of Liverpool’s willingness to do a deal mid-season rather than wait until the summer.

Purslow feels a Champions League quest and top-four push in the Premier League has now been compromised, with those at the Anfield helm accused of prioritising money over on-field success.

The former managing director at the Merseyside giants told Sky Sports: “It’s quite exceptional to see a top team in contention in two important trophies (the Champions League and the FA Cup), and obviously the day-to-day business of making sure you’re in the top four. They’re all very, very live season challenges Liverpool face.

“To effectively put money in the bank and take a player away – any football expert would say the likelihood of winning the Champions League without him has reduced, the likelihood of coming fourth is reduced, and they have already gone out of the FA Cup – is in pure footballing terms, a gamble.

“Strategy and business is a very artificial separation because this sport centres around what happens on the field. There’s no use to Liverpool strategically to consistently not win trophies and, God forbid, not get top four.

“I would have thought the businessmen in the ownership group would not have needed to have taken that gamble. I would have expected – if they needed to give the player certainty, that he was going to fulfil his dream and go to Barcelona – then the deal could have been done with either money now with a loan back, or a contract deferred delivery of player and money in May.

“This player is a starter for Brazil, playing brilliantly. If Paris Saint-Germain, Real Madrid and Barcelona are all in for Coutinho on the back of a World Cup, this player may have been £200 million.

“The winners were Barcelona, the losers were Liverpool – other than their bank balance. Fans don’t care about bank balances, they care about winning.” 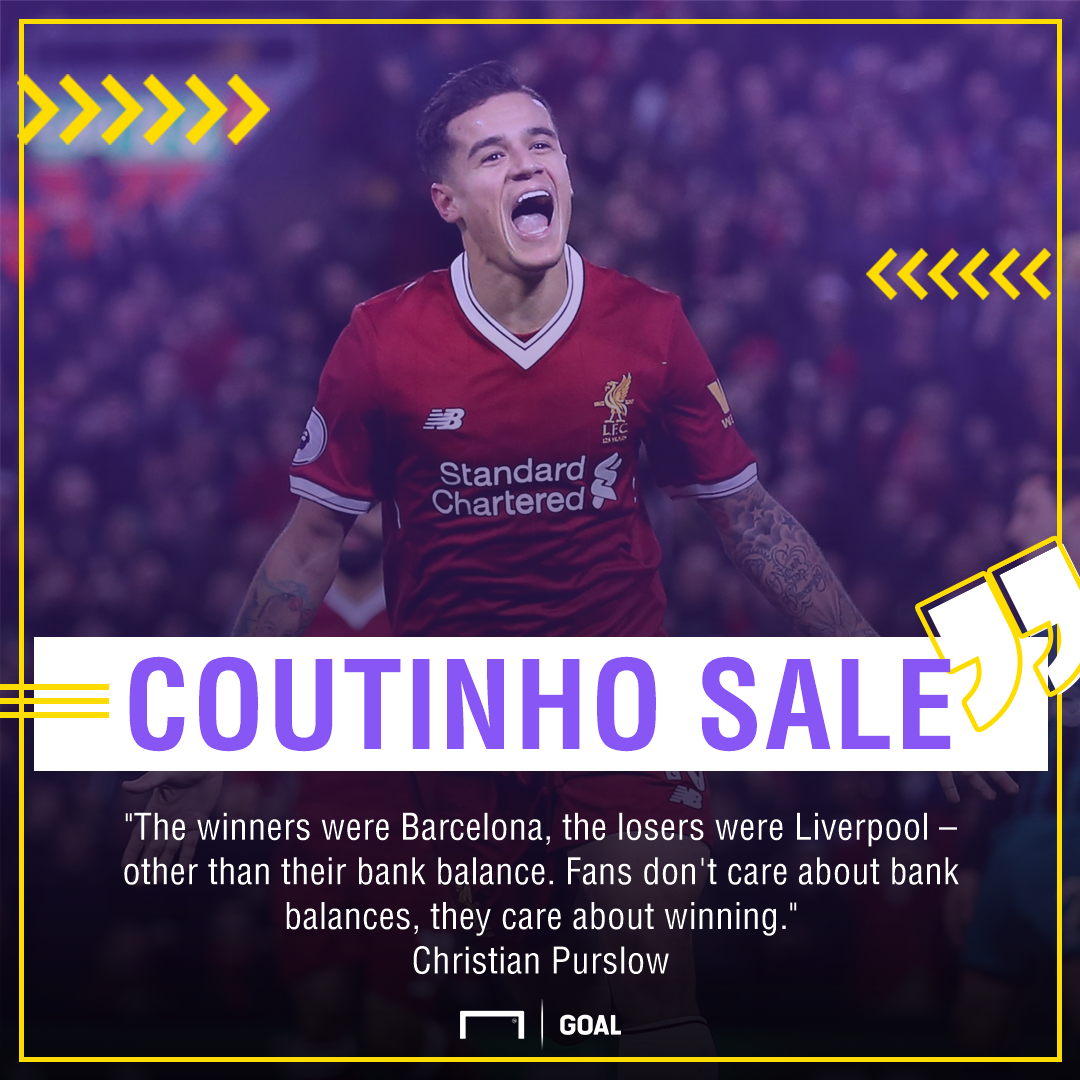 Purslow acknowledges that a deal may have been done eventually, as the likes of Xabi Alonso and Javier Mascherano left Anfield during his time at the club, but he feels the timing of Coutinho’s sale was all wrong.

He added: “We saw Xabi Alonso go to Real Madrid, we saw Javier Mascherano go to Barcelona – they do go eventually.

“The Klopp project is two-and-a half-years underway here and probably the next step in Jurgen’s success would be a trophy. Liverpool have the makings of a really dangerous team in the Champions League.

“Home second leg in the knockout stages? Nobody wants to go there even defending a one or two-goal lead. (If you reach) the last eight of the Champions League, anything can happen.

“But one thing is for certain, it’s less likely without Coutinho. I would have thought Fenway would have prioritised winning that.”