?Lionel Messi did what Lionel Messi does best on Wednesday night, as the Argentine maestro put on a show-stopping display in Barcelona’s 3-1 victory against Borussia Dortmund.

He lit up the Camp Nou on a landmark evening, the clash with BVB taking the 32-year-old to 700 appearances for La Blaugrana. In the vast majority of those matches, Messi has been unplayable. That ability to produce moments of magic on the regular has caused endless conflict, with countless fans arguing over whether he’s the greatest footballer the planet has ever seen.

Before people claim Messi is the finest in the world, they must first prove he’s the best player of his generation. ?Barça During GOAT-related debates, it’s not uncommon to hear people say Messi is the more rounded player, but Ronaldo is the more accomplished goalscorer. But according to this particular star, this couldn’t be further from the truth.

The Portuguese had struck on 504 occasions when he hit 700 club games, leaving him 109 off the tally of his counterpart. On top of that, a larger percentage of the ?Juventus superstar’s goals have come from the penalty spot.

Messi also scores a wider variety of goals, whereas Ronaldo tends to rely on his poacher instincts, with most of his efforts coming inside the box.

Of course, clinical finishing is nothing to be sniffed at, yet his foe has provided that and plenty more during his 18 years in Catalonia. Once again, Messi has a healthy lead over Ronaldo in this category. The former has collected 237 assists for La Blaugrana, while the latter had amassed 185 by the time he faced Valencia on 22 February 2017 in game 700.

The Barcelona legend showcased his remarkable playmaking skills as he added two more to his haul during the triumph over ?Dortmund.

Messi had already set up Luis Suarez for what looked like the opener, only for the linesman to raise his flag. It mattered not as a deft ball through to the Uruguayan allowed him to break the deadlock with an unerring finish.

Lucien Favre and his recruits were finally put out of their misery after the restart when an immaculate pass from the little wizard carved BVB open, allowing Antoine Griezmann to round off the scoring in emphatic style. Following his sparkling displays for Barça in 2019, it should be of little surprise to see Messi as the bookies’ favourite to earn the Ballon d’Or, which would take him to six.

Ronaldo has now been handed the award on five occasions, though one of those came after he reached 700 club appearances in Real Madrid’s 2-1 loss at the Mestalla.

So, the £100m Juve forward is level with Messi as things stand, but both age and the odds are in Messi’s favour as he seeks to become the outright record-holder for Ballon d’Or victories.

It should be increasingly obvious that Messi is a level above Ronaldo. There isn’t an enormous difference between the pair, yet it’s still enough to separate them. After all, that’s what the people want – a firm decision one way or the other.

Well, the fact Messi has fired home 46 hat-tricks during his

What’s more, the Argentine’s trebles are rarely dull. His hat-trick versus Sevilla in 2014 was certainly a memorable one, though a four-goal annihilation of ?Arsenal during the 2009/10 campaign may be the finest example of Messi’s work. Messi may have 10 league compared to Ronaldo’s four, but this stat doesn’t tell us a great deal about who’s the stronger player.

Barcelona won both the 2004/05 and 2005/06 La Liga titles with the South American in their senior squad, yet he didn’t contribute a huge amount.

Messi scored seven goals across the two campaign, whereas Samuel Eto’o and Ronaldinho hit 77 between them.

It’s also worth considering who’s been lining up alongside him in Catalonia. Messi has been joined by the likes of Xavi, Andres Iniesta, and the aforementioned two – he was destined to rack up the trophies. This is another statistic that’s slightly misleading. As we’ve already addressed, team honours don’t necessarily reflect the abilities of the individual, though that’s not the only reason this one is deceptive.

Ronaldo would go on to win the ?Champions League in 2017 and 2018 with Real, his sublime showing against Juventus in the former seeing him named as Man of the Match.

Furthermore, he added four European Cups to his trophy cabinet in the space of five seasons. He was instrumental in Los Blancos taking a stranglehold on the continent, and the minute he left for Turin, his old club began to crumble. 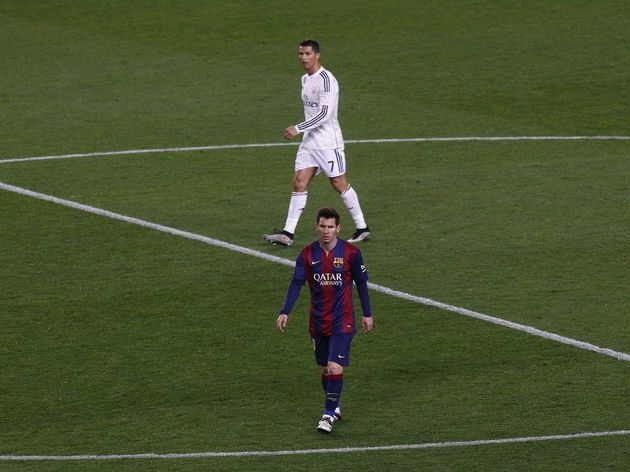 Ronaldo made the decision to sample life in four European countries during his career, which has seen him win a wide variety of trophies.

Messi, on the other hand, chose to remain loyal to his boyhood side. He’d collected six different major honours with Barcelona, tasting glory more often than his foe.

So, the mini magician takes the victory in yet another category, thereby officially sealing his status as the greatest of all time.