?Argentina captain Lionel Messi was controversially sent off in his country’s Copa America third-place playoff clash with Chile after clashing with Gary Medel.

The pair came to blows late in the first-half of the bronze medal decider when the Barcelona superstar took offence to a forceful shove from his opponent, with the two players’ teammates getting involved in the scuffle.

Despite Messi and Medel both receiving their marching orders, it is unclear whether the Argentine’s actions warranted a dismissal.

With Argentina leading 2-0, a l

The pair proceeded to batter their shoulders into each other as tensions soared in Sao Paulo, before the former ?Cardiff City enforcer pressed his forehead into Messi’s face.

The referee arrived on the scene almost immediately, brandishing a red card for the duo. But, replays showed the forward had pulled his head away as Medel moved in.

That Messi did not attempt a headbutt – combined with the fact that it was Medel who instigated the tussle – suggests the little magician was extremely unfortunate to be sent off. 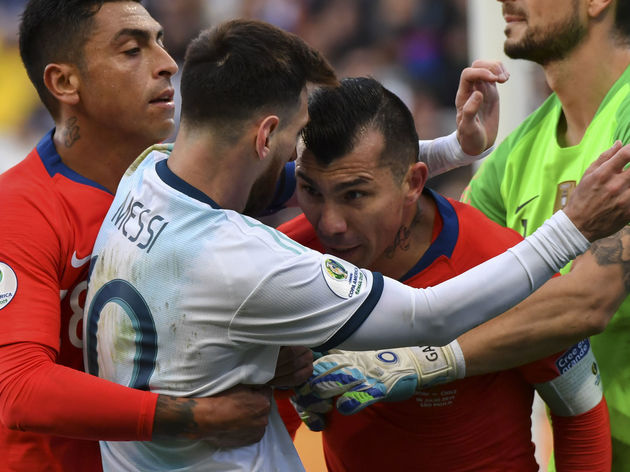 This latest refereeing fiasco will only irk him more after Argentina’s controversial 2-0 loss to Brazil in the semi finals of the competition, with Messi labelling the officiating in their heavyweight match-up as ?’bulls**t’.