You could say Napoli vs. Barcelona is the Maradona derby. The two European clubs that most famously employed the man who, for decades, was considered to be the greatest Argentine player ever. There was no room for debate…until Lionel Messi came along.

Now, however, there is a new diminutive, generational Argentine in town. No one seems to know how to split the two, and in many ways it’s a redundant debate; it’s near impossible to compare football in the 1980s and 90s to football nowadays.

Near impossible, but not entirely. 90min have done the work so you don’t have to, and come up with the absolute, definitive guide on which left-footed magician should be considered the better player. 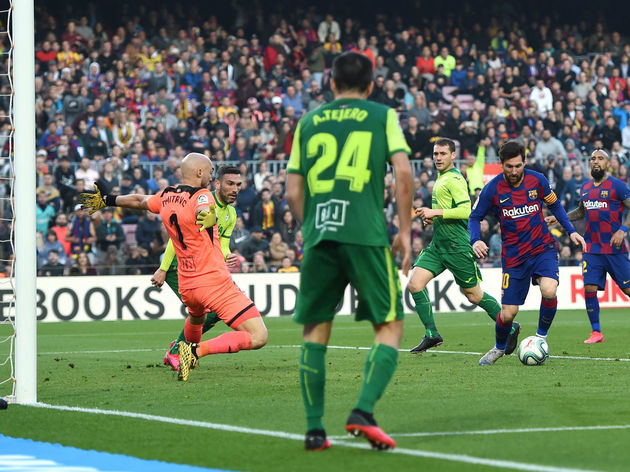 We’ll ease you in with the most obvious, most quantifiable factor before things go wildly off the rails. There has never been, nor will there ever be, a better pure goalscorer than Lionel Messi. There’s more to his game, but 626 goals in 715 games for Barcelona is nuts.

Don’t get me wrong, Maradona was never shy from hitting the back of the net. He racked up over 300 career goals for his slate of clubs (most of whom were never close to as good as the ?Barcelona teams ?Messi has featured for, but we’ll get to that later), but the stats don’t lie on this one.

If we’re not here assessing the two greatest players to have ever played the game, then we’re at least here assessing the two most effective dribblers. At his best, you’d need a turbo-charged bulldozer to get the ball off Messi, but at Diego Maradona‘s best, it was a scientific impossibility regardless of what hardware you had at your disposal.

The man was an anomaly, just ask the England team he single-handedly eliminated from the 1986 World Cup. If VAR was available, it might have ruled out his ‘header’ to open the scoring in Argentina’s 2-1 win, but that came only after he’d laid waste to the entire England midfield with his signature close control and low centre of gravity. And then it was shortly followed up with a second goal that saw him humiliate Peter Reid and run the length of the pitch before rounding Peter Shilton and doubling the scoring.

Even then, it was only a snapshot of what he could do with the ball at his feet.

You despair to think about how good a player Maradona might have been if he was pushed to meet 21st century standards of professionalism and had a Cristiano Ronaldo alongside him all the way. The fact of the matter is, however, that he wasn’t, and he didn’t. When you consider Messi has had to contend with a standard of defending that Maradona was never consistently faced with, then, you probably have to give this one to the current Barcelona captain, whose consistency levels over the course of his career are nothing short of freakish.

No debate to be had here, really. With all his off-field controversies, it’s easy for the modern football fan to overlook just how much of an inspiration Maradona was to everyone he played with, but he was no stranger to quite literally dragging his team-mates along; something Messi has never had to do. Eight major honours including three Serie A titles and an UEFA Cup is not a trophy haul to be snuffed at, especially when you consider Maradona didn’t exactly have Xavi and Andrés Iniesta in the same team as him for the majority of his career – though Fernando De Napoli and Salvatore Bagni weren’t the worst alternatives.

Star-studded team-mates or not, that’s preposterous.

One of the biggest criticisms levelled at Messi is that ‘he’s never done it for Argentina.’ That’s not quite true, to be fair; if 70 goals in 138 caps isn’t ‘doing it’ then what is?

The criticisms aren’t entirely without merit, however. His strike rate does fall some way short of his own stupendous standards, and he has never scored at a World Cup outside of the group stage despite competing at four of them. Maradona on the other hand? The World Cup was his jam. He scored five goals and registered five assists as he inspired an otherwise unremarkable Argentina team to that 1986 win. That remains the last time they won the famous trophy, despite Messi having a few cracks at the whip since.

Summary time. Let’s be honest; this is a debate that doesn’t really need to be had. Both players gave their all (still giving, in Messi’s case) and have nothing left to prove to anyone. They each made a seismic impact on world football, and we’ll still be at each other’s throats discussing this long after both are gone.

It seems almost every factor we consider has a caveat; Maradona might have been superior on the ball, but was less decorated; Messi scored more goals and won more trophies, but that could be down to his superior team-mates. If there’s one non-negotiable differential, however, it’s that Maradona was capable not only of delivering himself, but of dragging his team-mates up a level (or ten). If Messi was able to do that to the same extent, he’d surely have a World Cup – or even a Copa America – to show for it.

There is very, very little in this, but for that fact alone, it’s Maradona who comes out as the true GOAT.