Over the last decade or so, since the Barcelona treble season of 2008/09, Messi has broken football down to its fibres and rebuilt it in his own image. He’s done it in front of everyone. In full HD. On Twitter. On Facebook. On TikTok. Probably. Does anyone know if they do football on TikTok? Not sure. 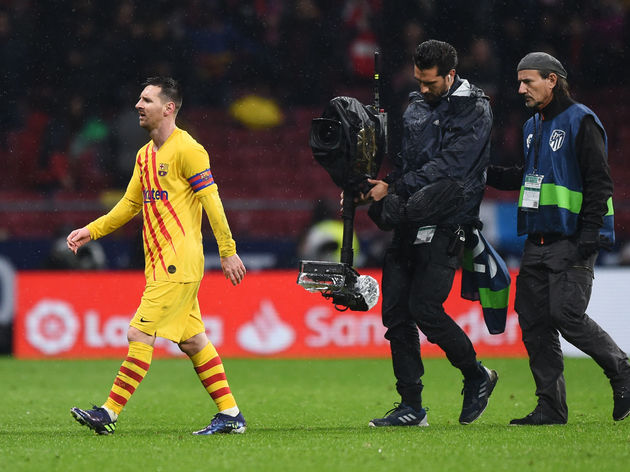 Pele did things that nobody before him had done. Maradona did too, and at a time when some big domestic games were being broadcast overseas. They may – and we’re getting to the point of splitting hairs – have even done it slightly better. But for impact, for being on every screen at every time, for being by far the best player in the world at a time when everyone in that world can know it without a single shadow of a doubt? ?Messi is different.

There aren’t many new Messi stories; everyone’s heard them. He’s the most written-about footballer on the planet, so reminiscing about his origins (plucked from Rosario at 13, a contract offered on a napkin, treated for a growth hormone deficiency, etc) is passé. Listing his numbers is asinine and, besides, misses the essence of what makes Messi Messi. For the greatest footballer of the 21st century, Leo Messi is harder to write about than you’d expect.

So we don’t talk about Messi directly. We skirt around his talents and talk about the aura around him (captivating), or the power he holds at his club (complete, although he’s careful ever bring its full brunt to bear publicly), or how he compares to his contemporaries (he doesn’t).

We talk about how, in the first half of his career, he seemed like a footballer out of time. His long, unfashionable mop of hair, his diminutive stature, the quietness that seemed to come from some silent, intense determination but simple shyness. Against the bleach-blonde surfer cool of Fernando Torres and the sheer Cristiano Ronaldoness of Cristiano Ronaldo, Messi would fade into the background like an anxious kid at a school disco. Until he got the ball at his feet.

I think about this photo often. Messi got roasted so hard for looking like a chaperone that after this he grew a beard, dyed his hair blonde, got the awful tattoos, and finally got a stylist. pic.twitter.com/9nNAFDvE44

We talk about his rivalry with Ronaldo, and whether either of them would have reached the heights they have without the other – whether having that constant nagging reminder that they had someone to beat drew ever-more extraordinary things out of them. It’s not hard to imagine that the modern Messi, with the beard and the tattoos, who makes the best part of half a million pounds per sponsored Instagram post, also came from that internal comparison with Ronaldo. He couldn’t just be the quiet genius, not when he had to beat the showman.

We talk about how much he means to ?Barça, institutionally, symbolically and on the pitch, and the state of the team without him. How he helped them survive Xavi leaving. Iniesta leaving. Eto’o leaving. Neymar leaving. How he might be the only person who can help them survive Neymar returning.

In our less generous moments, we might also talk about the fact that, dating back to the 2011/12 season, he’s scored nine goals in 24 ?Champions League games from the quarter-final stage onward. In ties where Barcelona have been knocked out in that span, he’s scored two goals in 13 games – both against Liverpool last season. How his habit of not stepping up in those biggest of games has cost Barça trophies on the European stage. Whether or not that’s his fault; whether he’s too integral to the club, whether the blame should fall on the players around him for not providing the support.

The World Cup will come up. Not once in eight attempts, across four World Cups, has Messi scored a goal in a knockout game. Three Copa America finals, no goals. Three defeats. No trophies. Unless something big happens at next summer’s Copa America (Messi’ll be 34) or the 2022 World Cup in in Qatar (a 35-year-old with over 1,000 competitive games on the clock), one of the greatest careers of all time have a huge, stonking great asterisk next to it.

07/03 – On this day in 2012, Lionel Messi became the first player to score five goals in a Champions League match, in Barcelona’s 7-1 win against Bayer Leverkusen. Goat. pic.twitter.com/R3JtesCRy4

Or…it won’t. For so many, the lack of international success nothing more than a crutch for people who need to niggle, to complain, to ask ‘but wouldn’t he have been better if…?’ Some of the blame for Argentina’s failures can be laid at the feet of coaches, of a weak crop of defenders, of strikers and other creators who failed to make the most of the space and chances provided by opposition teams’ monomaniacal focus on stopping Messi.

We talk about all of these things, because we have to talk about Messi and we don’t have the words to do it directly. Because Messi has redefined what excellence is in the modern era, scoring at a goal per game for a full decade and providing more assists than any other player in the world. Doing it all with a left foot that could pick the locks on the front gate of Fort Knox. Doing it all for us to see, and see again, and pore over for every single second of his career.