?Barcelona superstar Lionel Messi will not be forced to miss any games as a result of the heavy challenge from Manchester United defender Chris Smalling in the Champions League on Wednesday night and is available to face Huesca in La Liga on Saturday.

Messi was left with a bloody nose and a cut to his eyelid after being clattered by Smalling during Barça’s 1-0 win at Old Trafford, but Sergio Busquets reassured fans after the game that he didn’t think the five-time Ballon d’Or winner’s nose had been broken. 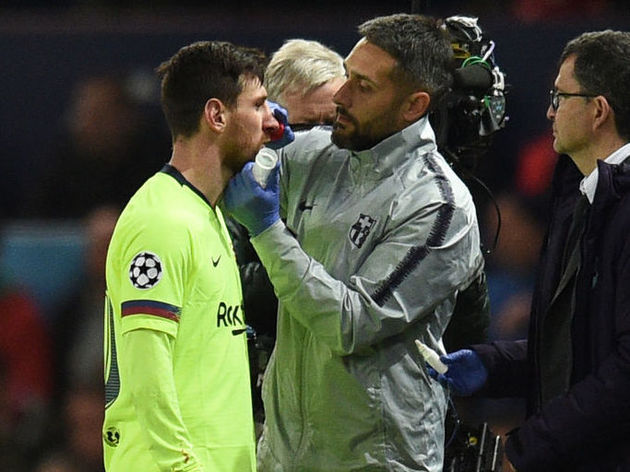 According to SPORT, Messi was checked over by Barça medical staff on Thursday and passed fit for the domestic clash with Huesca at the weekend.

Whether coach Ernesto Valverde chooses to rest key players and rotate his team against La Liga’s bottom club is another matter. Messi in particular has played 42 games for club and country so far this season and hasn’t missed league fixture since a broken arm in November.

That being said, Valverde almost paid the price for leaving his captain and talisman on the bench in the recent 4-4 draw against Villarreal – Messi came on to help spare the blushes.

Smalling has since revealed that there was no bad blood with Messi after Wednesday night. “We spoke afterwards. We had a brief chat and shook hands. He knew it was an accident. I didn’t realise at the time that I’d actually caught him like that,” the United player told BBC Radio 5 Live.

“Suarez [came up to me] after the game as well. We had a good tussle and he just shook my hands afterwards and said ‘good luck’. It’s nice when you can have that battle on the pitch and then there’s respect after the game because, ultimately, you are just trying to do your best.”