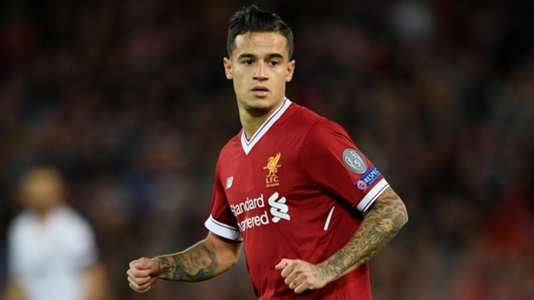 Jurgen Klopp praised the Anfield crowd for the way they reacted to Philippe Coutinho’s return – and hinted the Brazilian could start against Burnley on Saturday.

After failing to force a move to Barcelona, Coutinho made his first club appearance of the season as a second-half substitute in Tuesday’s 2-2 Champions League draw with Sevilla.

The home fans greeted the sight of the 25-year-old on the touchline with applause, although the replacement was unable to mark his comeback by helping Liverpool grab a late winner in their Group E opener.

With Sadio Mane unavailable for the weekend, Coutinho is ready to replace his suspended team-mate for the clash with Sean Dyche’s side on Saturday, according to his manager.

“You can get minutes when you start. He should be ready,” Klopp told a media conference.

“It was really nice how the crowd welcomed him. Nobody was 100 per cent sure about this – I think for him it was good. He was outstanding in training in the few sessions we’ve had so far.

“The game was not perfect, but that’s how it is after the long break. However, it helped him and it helped us.”

Klopp: “[Phil Coutinho] trained outstanding in the few sessions we had together. For sure, he’s ready to think about [as a starter].” pic.twitter.com/dwsNKkHsMh
— Liverpool FC (@LFC) September 15, 2017

Mane will sit out Liverpool’s next three domestic fixtures after his red card in the 5-0 away defeat to Manchester City.

However, Klopp is confident the squad can cope in the absence of the Senegal international, just as they did at the end of last season when he was sidelined for the run-in due to a serious knee injury.

“It was clear before the season that there would be moments when he cannot – or should not – play,” the German said of Mane.

“That’s how we reacted when building the squad. We have options – enough options.

“Roberto [Firmino] already played left and Phil can play there. Alex [Oxlade-Chamberlain] can play there too. We can change the system as well, so we can do a lot of things.”

Adam Lallana won’t feature against Burnley, however, with Klopp revealing the England international will start running again “this week, or the beginning of next week” as he steps up his recovery from a thigh injury.