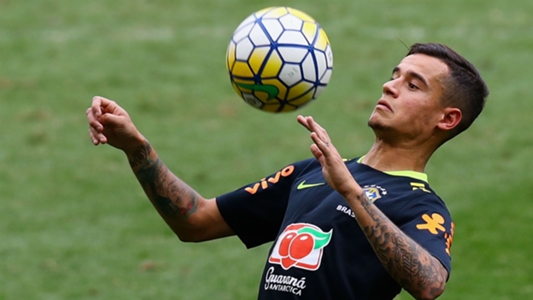 Jurgen Klopp expects wantaway star Philippe Coutinho to link up with Brazil for international duty even though he is yet to play for Liverpool this season.

Coutinho has handed in a transfer request at Anfield in the hope of pushing through a move to Barcelona, but the Reds have held firm and insist that the player will not be sold.

With no conclusion to the saga, Coutinho has yet to feature for Liverpool this season with Klopp maintaining that a back injury is the reason for his continued absence.

Klopp, though, expects Brazil – who have World Cup qualifiers against Ecuador and Colombia on the horizon – to check up on Coutinho.

“At the moment, [Coutinho] is on our injury list,” Klopp told a pre-match news conference ahead of Liverpool’s clash with Arsenal. “That hasn’t changed.

“I’ve not been in contact so far with the Brazilian FA, but it’s like the rules are – if they want to see him and check him, then of course he has to go there. That’s how it is.

Klopp on #LFC injuries: “Only small things, nothing major. Trent has a dead leg, Emre had a little twist – shouldn’t be too serious.” pic.twitter.com/vbUxH2bn9S
— Liverpool FC (@LFC) August 25, 2017

“I don’t know exactly, but I think it will happen, and we have no problem.”