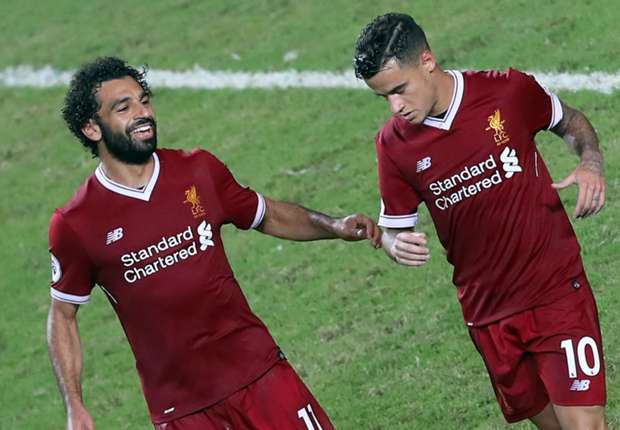 Jurgen Klopp is excited by the blossoming understanding between Philippe Coutinho and Mohamed Salah after witnessing Liverpool turn in a classy 3-0 win at Hertha Berlin.

Get Liverpool at 11/1 for the PL title

Coutinho’s future on Merseyside has been the subject of strong speculation amid links Barcelona are eyeing the playmaker as a potential replacement for Neymar should he make a stunning switch to Paris Saint-Germain.

But Coutinho wore the captain’s armband at the Olympiastadion and laid on a stunning assist for close-season signing Salah to make it three with a clever dink in the second half after Dominic Solanke and Georginio Wijnaldum had scored in the opening 45 minutes.

And Klopp was delighted with their impact, saying: “I think players like this understand each other.

“It’s a good thing with having players of this quality. I was pleased but it was what I expected.

“The pass was nice and the finish was not too bad also.”

As well as Salah, fellow new signings Solanke and Andrew Robertson were given run outs and Klopp is happy with the impact his additions are having on Liverpool’s squad.

“The new players are maybe better than people thought they will be,” he added.

“I think we said early that we want to build on the squad from last year, and that’s what we’ve tried to do. For the moment, we’re really happy.

“We don’t have many injuries now, which is the best news and if we can stay fit, we can be very strong.

“Unfortunately, the other teams are also really pretty strong in England, so we have no choice but to be at our highest.”