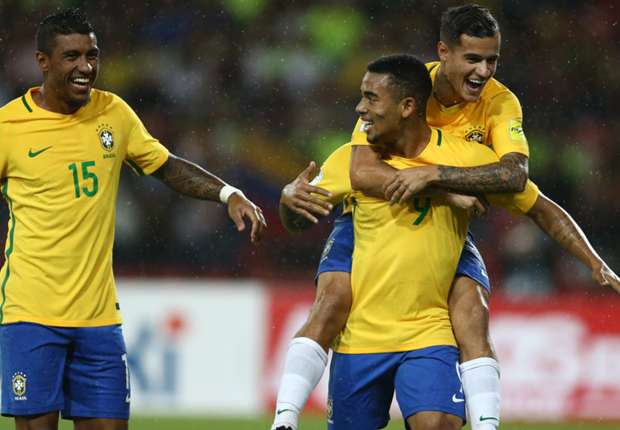 Set to face Russia and Germany this week on the Brasil Global Tour, coach Tite will look to his star trio to fire his side to victory in Europe

The battle to be Brazil’s top scorer in the Tite era will continue this month as three Selecao hotshots take aim at top spot.

While Neymar remains the central figure in the team’s attacking play, Tite and his staff has worked tirelessly to limit the team’s dependence on the PSG star.

Training was closed today but here’s the team we now expect to line up vs Russia. Tomorrow’s training session should confirm the XI

While previous coaches suffered criticism for a ‘Neymar or bust’ approach to their attacking play, Tite’s side have reduced their dependence on the outstanding player of this generations, splitting the goals between a number of important players in the squad.

While still playing a leading role, Neymar has been integrated into the side’s attacking play rather than other way around, and centre-forward Gabriel Jesus tops the scoring charts under Tite.

Despite missing three of Tite’s 16 matches – for which the player was eligible – the Manchester City star has hit eight goals in 13 appearances for his country.

Even though he’s playing more for his team-mates, Neymar has still found the net regularly. The Selecao No.10 has hit the net seven times, with six of those arriving in Word Cup qualifying.

Paulinho is not far behind, with six goals since his recall to the Selecao. The Barcelona midfielder has been reborn under Tite and has repeatedly timed late runs into the box to find the net.

His goals from midfield will no doubt be key to Brazil’s World Cup hopes – as will those of his Barca colleague Philippe Coutinho, who broke into the team under Tite and, for the first time, has been able to consider himself a genuine first-team player for his country.

Brazil meet Russia in Moscow on March 23 before heading to Berlin to face Germany on March 27.

Track Brazil every step of the way on this month’s Brasil Global Tour by following us on Instagram , Twitter and Facebook for live updates, analysis, videos and more.