As La Liga pauses for the March international break, Barcelona hold a ten point lead at the top of the table with eight matches left to play, as the Spanish giants close in on their fourth title in five years.

Barca’s last league defeat came in November, but Ernesto Valverde’s impressive squad cohesion has been forcibly interrupted as no less than 15 stars traveled to all corners of the globe representing their countries.

Argentina couldn’t make it a triumphant return, however, losing 3-1 to Venezuela in a friendly at the Wanda Metropolitano, despite Messi earning his usual plaudits

Although the La Liga top scorer played all 90 minutes, Barca supporters were left holding their breath after their superstar picked up a groin injury, forcing him to miss his country’s second friendly against Morocco, and he now faces a race to be fit for the first leg of the Champions League quarter-final against Manchester United.

Rumours of a summer exit continue to swirl around the Brazilian midfielder, but Coutinho put speculation aside to start both of his country’s friendlies this month.

Coutinho played all 90 minutes of a 1-1 draw with Panama, before seeing 72 minutes of action in a 3-1 victory against the Czech Republic, which saw the five-time World Cup winners battle back from a goal down to emerge victorious.

Barca’s other Brazilian midfielder, Arthur, has found international opportunities harder to come by with Real Madrid’s Casemiro in front of him, but the emerging star did play 70 minutes of the draw with Panama before coming off the bench after 72 minutes against the Czechs.

Vidal continued his remarkable international career, playing 90 minutes in each of his country’s friendlies to earn his 104th and 105th caps.

Chile, who didn’t even qualify for the 2018 World Cup, will be concerned to see their protracted struggles continue, losing 3-1 to Mexico in San Diego before drawing 1-1 with the United States in Houston just months before this summer’s Copa America.

Each member of Barca’s Spanish contingent was given 90 minutes in one of Spain’s two matches while featuring on the bench in the other.

Jordi Alba and Sergio Busquets took the field for Spain’s first Euro qualifier against Norway as Sergio Ramos scored a second-half penalty to earn Luis Enrique’s side a 2-1 win.

Spain’s second qualifier, a 2-0 victory in Malta saw Alba and Busquets relegated to the bench as Sergi Roberto played a starring role, first at right back and then later in midfield. Semedo has seen limited opportunities for Portugal with Juventus’ Joao Cancelo ahead of him in the pecking order, remaining an unused substitute for both of his side’s Euro Qualifiers, a 0-0 draw with Ukraine before a 1-1 draw with Serbia.

The World Cup holders got off to the best possible start in their Euro 2020 qualification bid, hitting four goals past Moldova and Iceland en route to six easy points.

Locked into a formidable centre-back partnership with Raphael Varane, Umititi played every minute of his country’s international action, even scoring the opener in the simple 4-0 victory against Iceland.

Despite retiring from the Spain set-up after his country’s elimination from the 2018 World Cup, Pique returned to the international stage to play for Catalonia.

? Catalonia & Venezuela faced off in a friendly match last night.

? The game finished 2-1 to Catalonia…

Although the match was not officially recognised by FIFA, Pique played all 90 minutes in a team that included Premier Leaguestars Oriol Romeu and Martin Montoya, as Catalonia defeated Venezuela 2-1 courtesy of a late Javi Puado winner in front a near capacity crowd in Girona.

Belgium cruised to a pair of two-goal victories against Russia and Cyprus to start their Euro 2020 qualifying campaign on the front foot. 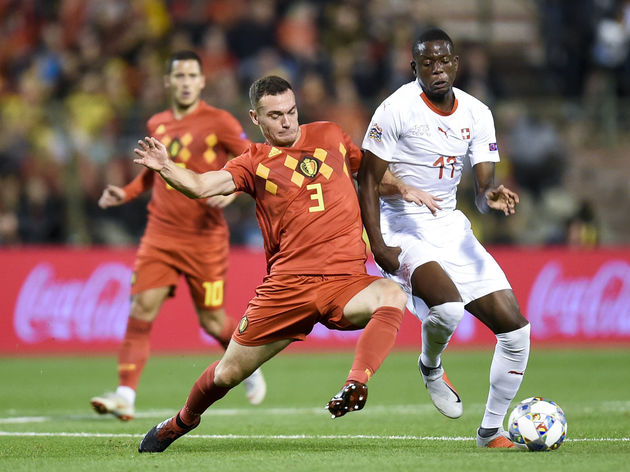 Vermaelen was an unused substitute for the 3-1 win against Russia but started at the heart of a back three in the 2-0 victory against Cyprus.

Cries for Ter Stegen to usurp Manuel Neuer for the starting job as Germany keeper has turned to deafening roars over the past few months with the Barca number one earning a reputation as one of the game’s best goalkeepers.

Joachim Low, however, remained loyal to his captain as Neuer started both of his country’s matches, including a dramatic 3-2 victory against the Netherlands that saw Nico Shulz grab a late winner for a youthful German team.

Prior to that Euro qualifier, the Barca goalie replaced Neuer for the second half of 1-1 friendly against Serbia, Ter Stegen keeping a clean sheet in his 45 minutes of action.

Ter Stegen’s Barcelona deputy continues to be a worthy starter for the Netherlands, playing every minute of his country’s international action this month. Cillessen kept a clean sheet in a 4-0 victory for the Dutch against Belarus before conceding a last-minute winner in the pulsating 3-2 defeat to Germany.

After reaching the World Cup final last summer, Croatia have struggled with a post-tournament hangover that seeped into the international break.

Rakitic maintained his starting role for his country as Croatia defeated Azerbaijan 2-1 before falling to a shock 2-1 defeat against Hungary, despite taking an early lead through Ante Rebic.

The Colombian centre-back has predominantly featured on the bench for Barcelona since arriving from Valencia in January and continued to occupy a bench role for his national team. Murillo was an unused substitute for his side’s 1-0 friendly win against Japan, before playing half an hour as the replacement for an injured Yerry Mina in Colombia’s 2-1 friendly defeat to South Korea.