The name ?Helenio Herrera may be unfamiliar to modern football followers, but the legendary Inter coach was an icon and a trailblazer during the 1950s and 1960s.

Amongst his many honours as a manager are four La Liga titles, a pair of Copa del Rey triumphs, three Italian crowns and a brace of European Cups. The mid-20th-century saw Herrera write his name into the history books, and change the role of the gaffer in the process.

Born in Argentina but naturalised in France, the eccentric traveller found glory with both ?Barcelona and ?Atletico Madrid, though that was a mere prelude to his remarkable achievements at San Siro.

His unique coaching methods and pioneering use of psychological techniques took the ?Nerazzurri to the summit of European football. However, he also needed top personnel to implement his ideas and plans on the pitch.

Here’s a look at the best 11 players to have worked with Herrera during his distinguished career in the game. Giuliano Sarti (GK) – The shot-stopper turned out for seven different clubs in Italy, though his longest stay anywhere was in Milan. With Inter, Sarti formed a crucial part of a formidable defence that helped the side dominate the continent for years. Without such solid foundations, Herrera’s Catennacio style-of-play wouldn’t have worked.

Tarcisio Burgnich (RB) – Like Sarti, wing-back Burgnich was an irreplaceable fixture at the back. Rapid across the turf and possessing an immense engine, he was the perfect fit for his manager’s system. He collected a total of eight trophies with the team; no wonder he decided to stick around for over a decade!

Armando Picchi (CB) – It should start to become clear that Inter’s backline was far superior to that of their rivals. They allowed Catennacio to become more than just an idea in Herrera’s mind, as a strong defensive lineup was necessary for the game-plan to work. And it was Picchi who was at the centre of it all, commanding teammates and crushing opponents.

Aristide Guarneri (CB) – Not all footballers are blessed with physical prowess, yet it is not always necessary to succeed. Guarneri demonstrates this. He was a true student of the game, utilising his intelligence and insightful reading of play to see off danger and keep strikers at bay.

Giacinto Facchetti (LB) – Attacking full-backs are the craze these days, but such a notion was unheard of when Herrera first stepped into a dugout. Il Mago saw Facchetti and knew the left-back had the ability to bomb forward without putting the rest of the team at risk, such was his stamina. The speedster and Burgnich made Inter both solid at the back and overpowered up front, acting as auxiliary wingers whilst the opposition struggled to handle the onslaught. 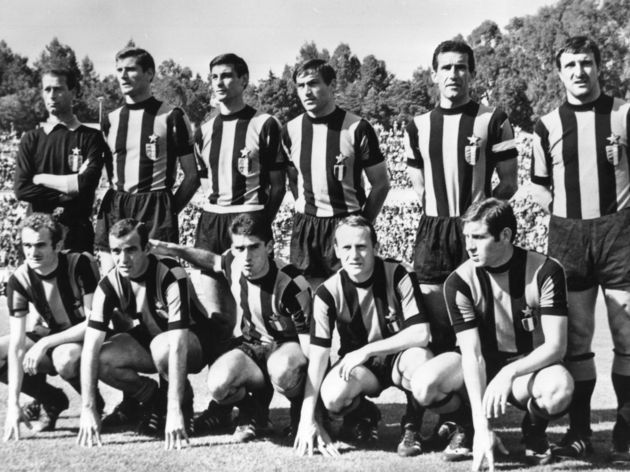 Gianfranco Bedin (RCM) – It’s probably rather obvious that Herrera wanted his men to play at a high-tempo, pressing and punishing the mistakes of their rivals. Bedin epitomises that all-action energy, relentlessly hounding and harassing those that dared challenge the Nerazzurri.

Sandro Mazzola (CM) – His brother never made the step up to the Inter first-team, but the Mazzola name will always be respected at San Siro thanks to the efforts of Sandro. The entirety of his 17-year career was spent there, the playmaker amassing 161 goals in 568 outings. Able to play almost anywhere across the park, there was no chink in the Italian’s armour. Oh, and he also hit a double in the 1964 European Cup final victory over ?Real Madrid.

Luis Suarez (LCM) – The only individual on this list to have worked with Herrera outside of Milan, Suarez first came to prominence at Barcelona, earning two ?La Liga titles with La Blaugrana. However, he truly blossomed once he rejoined the maverick manager at Inter, becoming a superb deep-lying distributor, despite his physical attributes taking a distinct downturn. Joaquin Peiro (RW) – With his side needing to claw back a two-goal deficit following the first leg of their semi final clash with ?Liverpool, Peiro grabbed a crucial goal as Herrera’s side secured a 3-0 triumph in Milan, sending them through to the showpiece event. They duly downed Benfica 1-0 in Switzerland, with their Spanish forward once again terrorising the opposition defence.

Mario Corso (LW) – At one time, Corso was the club’s youngest ever goalscorer and he would go on to feature in 16 separate campaigns for his boyhood team. Unsurprisingly, he received the captain’s armband once he reached full maturity, leading from the front and bolstering a potent attack.

Angelo Domenghini (ST) – A knack for breezing past defenders – and making it look easy – made the speedy striker more than just a finisher. Herrera expected Domenghini to be one of the key creators for Inter, as well as one of the main goal-threats. H