Philippe Coutinho and Isco lead the FIFA Ultimate Team of the Week, while both Vincent Kompany and Olivier Giroud are included.

Coutinho was at his productive best in Barcelona’s 2-1 win over Valencia, setting up both goals, as he settles into a groove at Camp Nou, while Isco, by comparison, scored a superb free-kick on his return to former club Malaga as Real Madrid won 2-1.

Kompany will get his hands on the Premier League trophy soon, as Manchester City’s 3-1 win over Tottenham – in which the Belgian completely nullified the threat of Harry Kane – coupled with Manchester United’s dire 1-0 loss to West Brom, confirmed Pep Guardiola’s men as champions.

Giroud, meanwhile, again proved that he can be an exceptional super sub, as he came off the bench to inspire an exceptional Chelsea comeback against Southampton. The Frenchman pulled a goal back with the Blues 2-0 down, and then netted the winner after Eden Hazard had equalised, keeping Antonio Conte’s men in the hunt for Champions League qualification.

Elsewhere, Gianluigi Donnarumma earns a spot on the bench after a brilliant save late on earned Milan a 0-0 draw with Napoli, while Wilfried Zaha earns a striker card after scoring twice in Crystal Palace’s 3-2 derby win over Brighton.

See the full squad below. 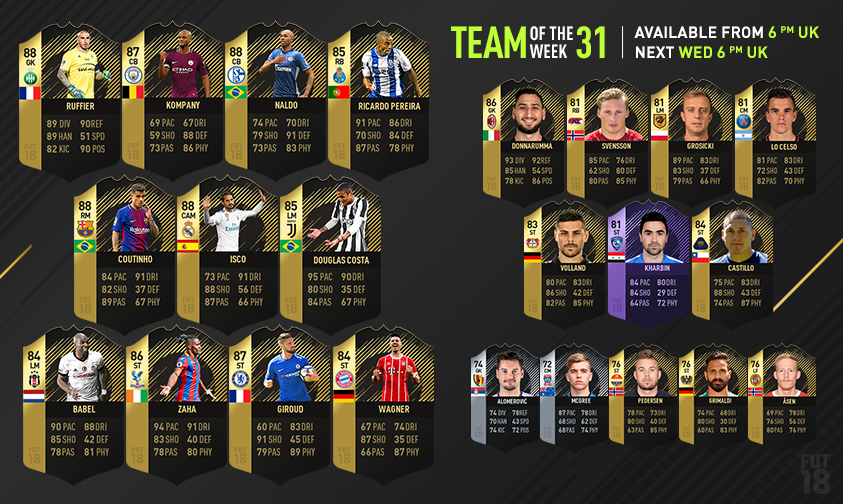