?When Neymar left Barcelona for PSG in 2017 for a world record €222m fee, many wondered who would be capable of filling his rather large Camp Nou shoes.

The world wouldn’t have to wait long to find out, as Barça forked out an initial €105m – with €40m in add-ons to follow – fee to snare Ousmane Dembele from Borussia Dortmund, making him, at the time, the second most expensive player in history.

With prices at an all-time high and market inflation continuing to soar, Dembele’s arrival was viewed as an expensive but necessary outlay. After all, he could prove to be the successor to Lionel Messi, who as great he is, won’t go on forever.

Sadly, for ?Dembele and ?Barcelona though, it hasn’t quite worked out. Injuries, injuries and more injuries have ruined his time in Catalonia, leaving the Frenchman’s once promising career hanging in the balance.

Don’t believe it’s been that bad? Well, take a look at this, as 90min spins you through every injury he’s suffered since arriving in Spain. 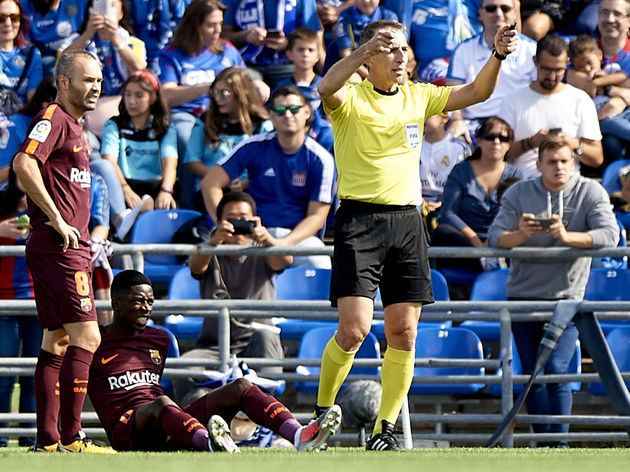 Dembele’s first – and sadly not last – hamstring injury, unbelievably, occurred on his first La Liga start for Barça, away at Getafe.

The injury would leave him on the sidelines for three months, leaving Dembele to watch on as the first Clasico of the season passed him by. Tragedy struck again for Dembele as he suffered another hamstring problem just four games into his return.

He missed both legs of the Copa del Rey semi-final against Valencia, and was moved away from the first team as Ernesto Valverde switched to a 4-4-2 formation. It would be another year before Dembele’s injury curse would strike again, and during that period he had a pretty good time of it, winning La Liga with Barcelona and the World Cup with France.

But then an ankle injury struck ruled the Frenchman out of yet another Copa del Rey semi-final, this time against ?Real Madrid. He did return for the second leg, though, assisting twice as Barça beat their fiercest rivals 3-0.? Dembele’s next bout of inactivity stemmed from more ‘muscle’ problems, ruling him out of action for just under a month.

More worryingly, Barça didn’t appear to miss him during this period, averaging three goals per game in their four outings. Ahhhh, back to the hamstring trail – with an injury that would end Dembele’s 2018/19 season, just six minutes into Barcelona’s clash with Celta Vigo.

On the positive, his absence allowed him to enjoy watching a brief – rather than a participating one – as Barça collapsed against Liverpool in their Champions League semi finals second leg tie. Yep, you guessed it, another hamstring injury for Dembele – and again, another shocking start to a season.

Another month on the sidelines followed, with five games and 34 days required to get over this latest problem. Just five days after returning to action, Dembele was ruled out once more – with another unspecified muscle problem ruling him out of Barça’s game with Getafe.

Unfortunately, the worst was still to come. At this point we can only assume Dembele would have been doing his best Brenda from Bristol impersonation and saying: “What, another one?!”

A fifth hamstring injury in just over two years was one of Dembele’s worst to date – ruling him out of the Spanish Super Cup, another Clasico, as well as Barça’s crunch Champions League clash with ?Inter.

Still, could only get better, right?

Sadly, things have deteriorated further, with a torn tendon in Dembele’s right hamstring – picked up during his rehabilitation – requiring surgery, ruling him out for six months.

Not only will be on the sidelines for the longest period of his career, he will now miss France’s Euro 2020 campaign – and question marks will be surely be raised among Barça’s hierarchy over his ability to recover from such a debilitating, ongoing injury.