?Barcelona manager Ernesto Valverde has acknowledged that his side weren’t brilliant in their 2-1 win over Leganes on Saturday.

Youssef En-Nesyri put the home side in front on 12 minutes, but Luis Suarez equalised eight minutes after half time. Arturo Vidal scored the winner with just over ten minutes remaining to ensure an uninspiring Barcelona picked up all three points and remained at the top of La Liga.

It was a poor performance away from home against the bottom club in the league and although Valverde admitted that his side weren’t at their best, he insisted he was pleased they could come away with a win. The 55-year-old was also keen to highlight the difficulties of playing on a sub-par pitch.

“It’s extremely important because we found ourselves behind and the game was going away from us. The pitch was terrible, it was very windy and they sat deep to defend,” Valverde said after the game, as ?quoted by AS.

“I don’t want that to sound like an excuse because we struggled. By pushing hard and going in search of openings through set-pieces we were able to win. But it was very tough. I know our game wasn’t brilliant but we are happy with the result. 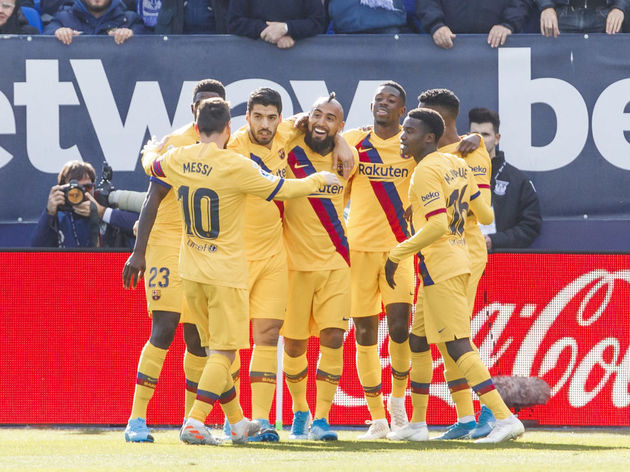 “I know that we have been getting a lot of criticism this season but we have had to come from behind in a lot of games. The team pushed and worked knowing that it was a difficult game – on one of those days.”

The manager went on to state that there are certainly many areas for improvement, but overall, he was pleased with the mentality of the team to keep going ?and get all three points while not playing at their best. “There are areas in which we need to improve and turn the situation around – there’s no doubt about that. But the team knew how to press forward when things weren’t going their way. That’s what I was pleased about. In the end, we managed to come away with a result.”

?Barça next host Borussia Dortmund in the Champions League on Wednesday and Valverde will be keen to see his side pick up a win, with their opponents currently just the one point behind them.