The La Liga champions have already retained their title and fielded a heavily rotated side for the La Liga clash, as goals from Maximiliano Gomez and Iago Aspas condemned the visitors to a surprise defeat at the Balaidos.

Ousmane Dembele was among the names drafted into ?Barcelona’s starting XI ahead of the second leg of their Champions League semi-final against ?Liverpool on Tuesday, but the Frenchman was forced off with an injury after just six minutes.

After the game Valverde admitted via ?Goal: “With Dembele, it looks like a tear. We had already noticed during the play that something was not right.

“We were worried quickly because it seems like a muscular tear. It is certainly not muscle fatigue because the other day he played very little [in Barca’s Champions League win over Liverpool on Wednesday].

? [BREAKING NEWS] O.Dembélé has a hamstring injury in his right leg. He’ll undergo tests tomorrow to determine the exact extent of the injury. pic.twitter.com/q3Ze4JijJE

“These things happen and as a coach I do not have an explanation.”

Speaking on his side’s defeat to Celta Vigo, via the club’s official ?Twitter account, Valverde added: “In the first half I think we played well, we dominated, we created danger, we just needed to create clear-cut chances.”

Both the result and the injury to Dembele come as significant blows in Barca’s preparations for their Champions League semi-final second leg at Anfield. 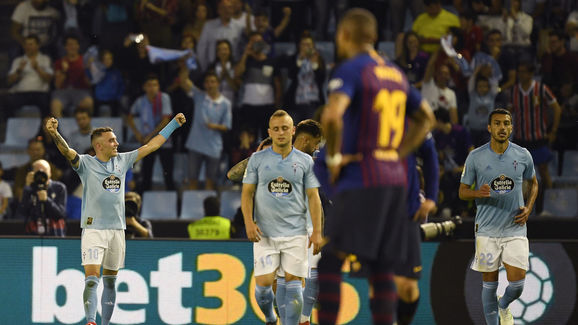 However, a 3-0 cushion from the first meeting at Camp Nou gives the Catalans a significant cushion heading into the clash, having not conceded an away goal, whilst Dembele was a late substitution in the first leg and would likely have been among the substitutes again on Tuesday.