Barcelona manager Ernesto Valverde has admitted that he’s fully aware that every defeat will only increase the pressure mounting on him.

The Catalan giants slipped to another disappointing loss this past weekend, going down 3-1 at Levante to register a third La Liga defeat of the season; as many as they recorded during the entirety of last season.

Fortunately, rivals Atletico Madrid and Real Madrid both slipped up as well, leaving Barça top of the table on goal difference – only three points ahead of seventh placed Getafe. Now, Valverde has revealed, in quotes carried by ?Marca, that he’s fully aware that every defeat will lead to people questioning his position as manager, acknowledging there is a “tidal wave” of pressure every time things don’t go Barcelona’s way.

?“When you lose you always look at the coach,” Valverde said in ?Barcelona‘s pre-match press conference, ahead of Tuesday’s Champions League clash with Slavia Praha.

“That is the case and I assume it. The other day Levante scored against us with their first shot. We controlled the game until we lost it, we were not good in attack and we have to improve.

“When you lose a game, you have more pressure [put on you as a coach of a big team. We know what it means to lose a game.

“It generates a tidal wave of pressure. It’s all right with us because it forces you to react. There’s always a tidal wave, even when you win and you have a good all-round game.” 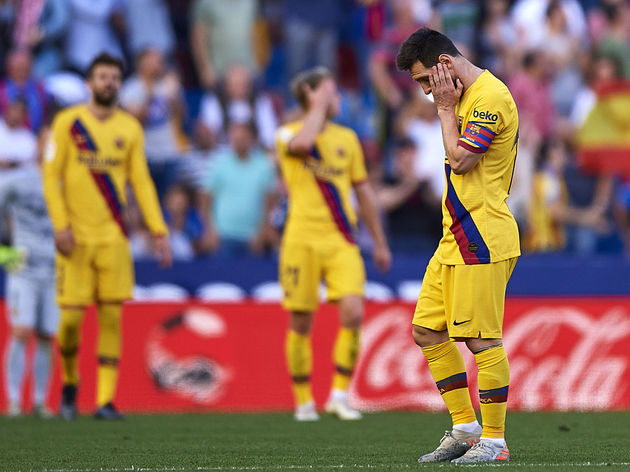 The 55-year-old continued by revealing that the post-mortem to Barça’s latest defeat will begin in earnest, as Valverde looks to understand why his team collapsed against Levante.

“When we lose a match, I try to find the football reasons [as to why],” Valverde continued.

“At the beginning of the season we were not good, especially away from home. Then we had a three-game winning streak away. The other day, when everything was on track, we lost it in a minute.

“We must ask ourselves why we have lost and [analyse] the relationships on the pitch that have led us to this.”

Barça will need to dust themselves down quickly when they take on Slavia at Camp Nou, after a surprise draw between the pair two weeks ago.