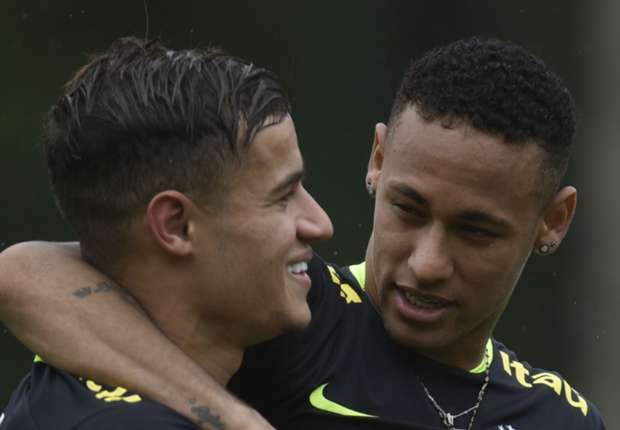 The Reds forward has been heavily linked with a move to Camp Nou, with his Brazil international colleague regularly talking up a possible transfer

Liverpool forward Philippe Coutinho has been hanging out with Neymar again amid ongoing talk of a possible move to Barcelona.

The pair are international team-mates with Brazil and share a close friendship.

With both currently enjoying a well-earned summer break, they have taken the opportunity to catch up – with Coutinho’s Anfield colleague Roberto Firmino tagging along.

It remains to be seen whether they will ever work together at club level, but they clearly enjoy each other’s company.

Neymar has talked up a possible move to Camp Nou for Coutinho in the past.

He told the Daily Mail in March : “A Premier League player that I would like to have in Barcelona is Coutinho.

“I believe Philippe Coutinho is a player that would totally fit in Barcelona.”

Coutinho has, however, sought to distance himself from the rumours after penning a new contract with Liverpool in January.

He told ESPN Brasil on the Barca links : “A lot of people ask me about that, but I have contract with Liverpool, I’ve just signed a long-term contract, so the speculation stays with you, journalists.”

Coutinho’s efforts in 2016-17 saw him spark the transfer talk, with his most productive season to date delivering 14 goals in all competitions and seven Premier League assists.