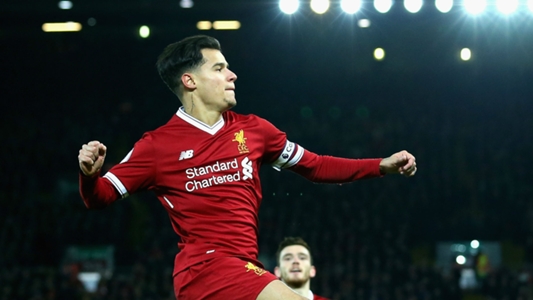 Philippe Coutinho will not regret leaving Liverpool for Barcelona should he make the move in January, according to Paulinho.

Liverpool rejected the Catalan side’s attempts to sign him during the close season, despite the Brazil international’s desire to head to Camp Nou.

Barca are expected to make another bid for the 25-year-old in 2018, and Paulinho has urged him to hold on and make the right decision if he gets the opportunity to move.

“I would advise him to be calm, to leave any anxiety aside. I also went through that when I was in China,” he told Mundo Deportivo.

“You have to think about the decision you are going to make. I think that if he has the opportunity to come, he won’t regret it.”

The speculation surrounding Coutinho and Barca remains as intense as ever, and Paulinho believes the former Inter star’s quality and technique would make him an excellent signing for Ernesto Valverde’s Liga leaders.

“He has a way of playing that everyone can see, both for Liverpool and Brazil. He is a very fast player, very agile, with a different technique, which gives many options for those who play in the centre of the field.

“He also looks for the free space to place the ball into and go for goal. His quality technique is what makes the difference.

“He can play in two or three positions and I think that will also help the coach and the players. Now I just have to encourage it to happen.

“I joke that people are already looking for a house for him. I try to give him the basic information, what is most important for him and his family, because maybe the time he spent here [while on loan at Espanyol] was not enough to know the city, but he knows that Barcelona is a very good city that offers everything for him and his family.

“Coutinho knows that there are great players, like Luis Suarez, who he met at Liverpool and he gets along with very well, he is a person who always tries to help.

“Now we have to wait until the transfer can be made in January for him to come here.”