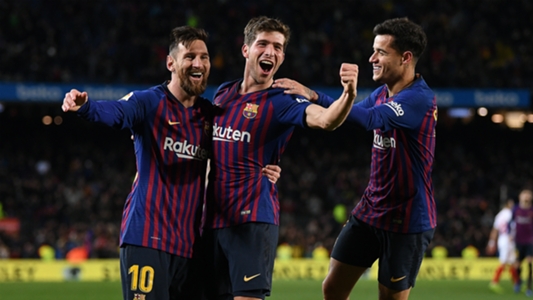 Coutinho has endured a difficult season with Ousmane Dembele seemingly preferred by Ernesto Valverde, but the France winger’s hamstring injury has opened a spot in Barca’s attack.

And Coutinho grabbed his chance with both hands in Wednesday’s second leg, scoring twice as Barca heaped more Copa del Rey misery on Sevilla, whom they battered 5-0 in last year’s final.

Barca’s 6-1 victory overturned a 2-0 deficit from the first leg when Messi was rested by Valverde, but the captain was in inspirational form at Camp Nou.

And when Messi was fouled by Quincy Promes he allowed Coutinho to step up to beat Juan Soriano and get the rout up and running, with former Sevilla midfielder Ivan Rakitic, Luis Suarez, Sergi Roberto and Messi himself also on target.

“The penalty has come naturally,” Coutinho told Barca TV. “Leo’s gesture shows how great it is.

“Thanks to Leo, for letting me kick the penalty, that’s good for the confidence of the group.

“We knew that to overcome, we had to be involved from the beginning.”

Barca join Real Betis and Valencia in the semi-finals, with either Real Madrid or Girona to join them on Thursday.