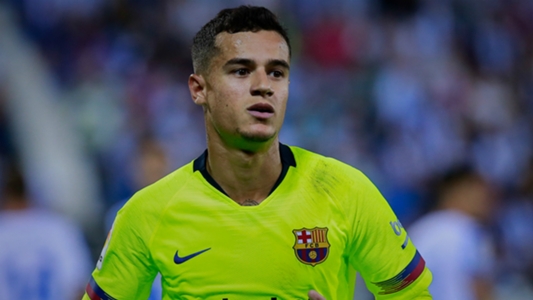 Jurgen Klopp has downplayed any talk of a return to Liverpool for Philippe Coutinho just over a year after his departure to Barcelona.

The Brazil international sealed his exit from Anfield in January 2018, after a prolonged struggle to make his way to Ernesto Valverde’s side.

However, after a promising start last season which saw him feature in a Barca side that took home the La Liga crown and Copa del Rey title, Coutinho has fallen on more difficult times this campaign.

A dip in production preceded a decrease in playing time, with Coutinho’s place coming under threat from Ousmane Dembele.

While he has featured in the Champions League and Copa del Rey, Coutinho’s start against Eibar last week was his first in La Liga since December 2, prompting talk of unhappiness for the playmaker.

Rumours of a move to Manchester United have popped up, as well as a potential return to Liverpool.

However, Klopp moved to squash the latter, saying it is not a likely move for the Reds, and he would only fuel speculation by speaking on it.

“That is something I don’t want to talk about,” Klopp told reporters. “I would not say it is a potential transfer or a likely one.

“Nothing to say. Whatever I say would open more stories and there is no story.

“Phil is at Barcelona and as I know he fits really well and everything is fine.”

Klopp’s own future became a question as well, with many of Liverpool’s big names committing to the club long-term.

Andy Robertson became the latest to do so after inking a five-year contract on Thursday, and the manager was asked if he might also see a new deal to tie him to the Anfield outfit beyond his current on, which runs until 2022.

However, Klopp said no talks are currently happening, and it is not something he is ready to think about quite yet.

“I would be really happy if they didn’t come now because I don’t want to think about it,” Klopp said.

“I have a long time, there will be a lot of changes before then [2022] but I don’t want to think about it at the moment. I am completely in this year and next year and then we will see.”

Klopp’s Reds host Crystal Palace on Saturday, hoping to at least maintain their four-point advantage over Manchester City at the top of the Premier League table.