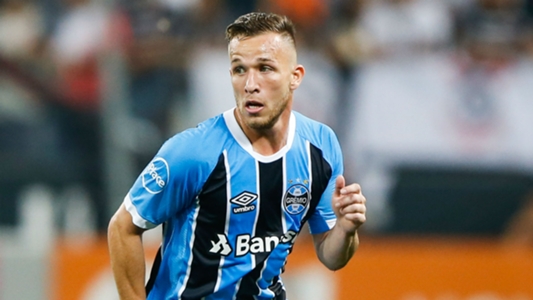 La Liga leaders Barca this week confirmed they have agreed a purchase option for Arthur, which can be exercised in July and will cost €30 million plus €10m in add-ons.

Such a move has long been touted with the 21-year-old having played a starring role in Gremio’s 2017 Copa Libertadores victory.

Arthur would further add to the Brazilian flavour in Barca’s impressive ranks, and it was two of his compatriots he sought out to ask about life at Camp Nou.

“I talked to Paulinho and Coutinho, the Brazilians there, I asked about the structure of the club, because I don’t know it personally. They praised it a lot,” he said.

“I’m happy to be negotiating with a club as great as Barcelona, a dream club, but the focus is on Gremio. When I’m in Barcelona, I’ll start thinking about Barcelona.”

Arthur added that a move to Barca is one that any player dreams of.

“I’m very happy, it’s a great club, one of the biggest in the world. Every player dreams someday to play there,” he said.

“I’m very happy with the negotiation, how it happened, without hurry, not wanting to take a step larger than we could. It was good for me and for Gremio.”