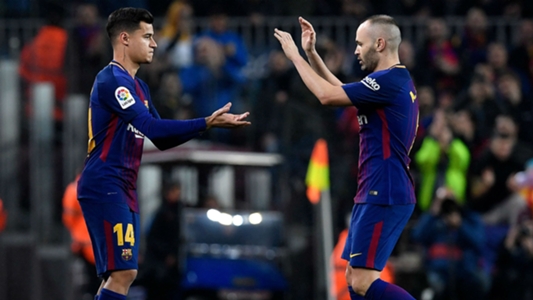 Philippe Coutinho feels comparisons between himself and “genius” Andres Iniesta are not appropriate as he wants to be known for his own game.

Coutinho’s arrival from Liverpool in the January transfer window was widely accepted to place the Brazilian in pole position to be Iniesta’s heir.

The long-serving midfielder moved to Vissel Kobe at the end of the season and Coutinho has slotted in to take the former Spain international’s place.

But Coutinho, who like Iniesta has played in both attack and midfield, rejected suggestions he is following in the 34-year-old’s footsteps.

“Andres was a genius, comparisons between us are tough,” Coutinho told a news conference ahead of his Champions League bow for Barca against PSV on Tuesday. “I just want to be myself and win as much as I can here.

“I try to work hard regardless of my position and I work hard on every aspect of my game, I feel more of an attacking midfielder and I am comfortable on the left as this is where I’ve played the most.

“My goal is to improve at everything and if I want to be like Andres Iniesta I have to improve a lot.

“My first job is to make plays in the midfield, in the middle it’s more difficult as I have to hold on to the ball and help my team-mates.

“In attack I can contribute to more goals, but I will do whatever job the coach asks me to do.”

Valverde: “We want to win the Champions League, like all the other teams in the competition. It’s a different competition, it’s short and you can’t afford to slip up” #BarçaPSV pic.twitter.com/BkXyi3wtGr
— FC Barcelona (@FCBarcelona) September 17, 2018

Coutinho could not play for Barcelona in the Champions League last term as he had already featured for Liverpool earlier in the competition.

Barca subsequently suffered a shock exit to Roma at the quarter-final stage, surrendering a 4-1 lead from the first leg as they were beaten 3-0 in Italy.

“It was tough for me personally and for us as a team because of the way we were eliminated, but this time we are determined,” Coutinho added.

“I wanted to help, but I could not. I was watching it on TV, it was very hard.

“Last year I couldn’t play and I’m looking forward to getting out there in the Champions League.

“Barcelona fight for all the competitions but the Champions League is the biggest and we are going to go for it.

“We haven’t won it in a few years but we have the players and we are hungry to go out there and win it.

“We have to keep working hard and it all starts right now in the Champions League.”