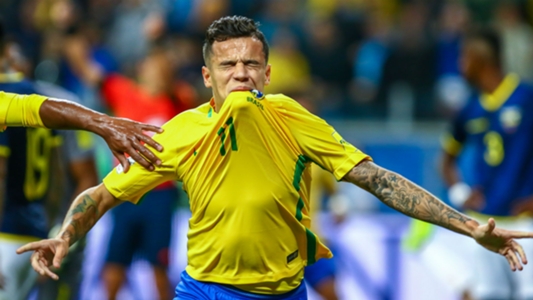 Brazil coach Tite believes Philippe Coutinho is fit enough to perform for 90 minutes, but says he will not start the Liverpool star against Colombia due to his lack of action this season.

Coutinho came off the bench to score in Brazil’s 2-0 win over Ecuador on Thursday — his first game of a campaign in which reported back injuries and illness have kept him out of Jurgen Klopp’s plans, all the while a mooted £100 million-plus move to Barcelona failed to materialise.

The playmaker is expected to report back to first-team training with Liverpool, who face Manchester City in a blockbuster Premier League clash on Saturday.

Coutinho 17/2 to score last at City

Though Coutinho will once again start from the bench in Barranquilla, Tite is certain that the attacker is fully capable of performing.

“Coutinho is physically fit to play 90 minutes,” Tite is quoted by Globoesporte.

“I can count on him for part of the game. He’s fine physically, but technically it’s different. He has not played for a long time.”

Liverpool held firm in their determination to keep Coutinho, who submitted a transfer request late in the window, reportedly rejecting four bids for the Brazilian.

Klopp intimated that he will welcome Coutinho back into the fold, telling SPORT1 this week: “We have exactly the situation we wanted.”